Is it morally correct to castrate horses? 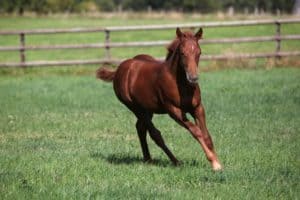 Castration (from the Latin "castrare" = to remove) describes the surgical removal of the testicles (= male sex or gonads). This operation is also commonly known as "intersection" or "laying". According to Section 6 (5) of the German Animal Welfare Act, these reproductive organs can be removed. Male horses are neutered in order to switch off their sexual behavior. Castration reduces the male sex hormones (so-called testosterones), thereby reducing the libido (sex drive). The sexual desire of the neutered (= gelding) declines in the best case or is as good as non-existent after a while.

The same applies to the completely natural willingness to aggression, which is why castrated horses - to put it simply - are generally less problematic ("more docile") in behavior and in dealing with conspecifics and humans. The testosterone level drops rapidly within eight hours after the removal of the gonads. In spite of this, the effect does not appear immediately in some horses, but only over the course of weeks or even months. It is not just hormonal but also genetic and learning-related effects that play a role here. Learning-related effects result from the so-called masculinization, which (to put it casually) represents a behavioral pattern in the brain. It is z. B. almost indelibly firm when the young stallions waiting to be castrated only had “breeding success” once before being castrated. This is the first (essential) step towards brain-like masculinization, which can also "motivate" the later gelding to (at least) hint at mating mares.

Genetics and masculinization also explain why even horses castrated at an early age show gender-specific behaviors such as showing off and breeding behavior towards other horses. The development of many gender-specific behavioral patterns is based (especially in late castrated horses) on the aforementioned “masculinization” of the brain. Unfortunately, this is far too little known. In any case, male yearlings should be prevented from breeding mares more or less successfully.

Remember: the current testosterone level is only decisive in a few areas of behavior. The following should also be taken into account: castration in no way replaces the important socialization, careful group integration or upbringing and behavior-appropriate keeping of the horse. Once problems have arisen, it does not save any consistent behavioral therapy.

However, basic temperament, breed typical and individual core character as well as gait disposition and performance are not significantly changed by castration. Because of the changed metabolic situation, geldings tend to accumulate fat and, from a certain overweight, also to develop a corresponding phlegm that is gentle on strength, but this problem can easily be avoided by proper feeding. The assumption that “performance” is gender-specific is also incorrect: a stallion is not more productive than a gelding because of his sexual instinct. It is widespread that stallions z. B. as dressage horses are more suitable than geldings. The mere fact that stallions piaffe excitedly under hormone control or present themselves in the proud middle trot on the pasture says absolutely nothing about the performance and willingness to perform under a rider (which is normally not controlled by hormones!). On the contrary: Successful training and sporting promotion of stallions require above-average riding and posture experience, above all sufficient patience and tolerance, but also situation-dependent consistency - with appropriate respect for the male species.

Anesthesia and castration surgery are never entirely without risk for every horse. The risk is initially always minimized through a good health status and optimal worm prophylaxis as well as surgery in an equine clinic. This is generally advisable in any case, but z. B. always almost mandatory with unilateral undescended testicles ("knocking stallion"). Complications (especially possible with older stallions) can be managed much better in a clinic. The most important thing is (regardless of whether on the home pasture, in the box or in the clinic) that the surgeon can work properly in a clean environment, in a quiet, safe, non-hectic atmosphere.

As far as the best season for neutering is concerned, it is advisable to go to early spring when no or very little fly brood has developed. The advantage is that operated horses are already grazed at this time of year and the healing process is enormously accelerated through free movement in the pasture in the fresh air. The largely fly-free late autumn is also suitable as a period, but weather-related (locally and technically different) longer stall times are rather unfavorable for the healing process. This can be compensated for by very meticulous litter care and daily intensive wound hygiene. But all of this requires a trained horse!

With regard to the age of the stallions to be castrated, opinions differ. From a biological point of view, it makes sense to castrate as early as the yearling, which, according to the author's experience, brings with it the fewest complications. In particular, one-year-old young stallions in the early sexual maturity stage, in which the “masculinization” of the brain has not yet been characterized by successful breeding experience (!), Promise to become horses that are very motivated and easy to socialize (“suitable for groups”). In addition, the typical stallion necks in particular in early castrated horses (e.g. with undesirable narrowing in many breeds, but especially in natural breeds such as Icelanders or Norwegian fjord horses) do not develop at all or only to a minor extent.

There is nothing to be said for a general late castration, for example only at the age of three or even later. In individual cases of (husbandry-related!) Underdevelopment in male foals, however, it may be advisable not to castrate until the age of two.

Always discuss this operation with the clinic or the treating veterinarian in good time. If transports are required, careful loading training several weeks in advance should be mandatory. Unfortunately, practice shows that this is often totally neglected and only on the day of the operation is the young stallion maneuvered into the trailer with combined forces, which from then on - also as a gelding - he will only see as a "straitjacket". Who z. B. also shies away from this effort, should not breed!