How can a country reduce income inequality

Income inequality has both growth-promoting and growth-dampening effects. The most important of these are positive and negative incentive effects: 1

In addition, income inequality can dampen growth through effects resulting from the collection of taxes to finance government redistribution. In addition to the welfare losses that are normally associated with the collection of taxes, political measures to reduce inequality should also be considered. For example, if the state uses more of its income for consumer transfers, fewer funds remain for public investments. In the long term, this reduces economic growth.

In the case of very high income inequality, there can also be further growth-dampening effects caused by social or political tensions. For example, the protests of the “yellow vests” led the French central bank to reduce its growth forecast for the last quarter of 2018 from 0.4% to 0.2% in December 2018.2 In addition, long-term negative growth effects can result if low-income families are unable to provide their children with a good education and thus the growth of social human capital is weakened.3 Finally, one should also think of a drop in demand, which acts as a brake on growth when large parts of the disposable income accrue in a few households with a high disposable income and a high propensity to save .4

The answer to the question of which of the effects mentioned here predominate depends largely on the extent of the income inequality already achieved.5 This becomes clear when two theoretically conceivable extreme distribution situations and the associated performance incentives are considered:

This allows the causal relationship between income inequality (UG) and the level of real GDP to be represented in the form of a simple function
[GDP = f (UG)]. Assuming a completely even distribution of disposable income (UGmin. = 0 with point Qmin. In Figure 1), an increase in income inequality leads to an increase in GDP because of the positive performance incentives. The maximum possible GDPmax. is reached at UG *. If income inequality continues to rise, the demotivating effects will predominate, so that GDP will fall. 6

The curve of GDP depending on the level of inequality shown in Figure 1 follows between UGmin. and UG * of a neoclassical production function. It is also conceivable that an increase in income inequality initially only leads to a slight increase in real GDP, the increases then increase and then decrease again. Up to UG *, this relationship corresponds to a production function under the law of income. The resulting relationship between income inequality and GDP is bell-shaped (see Figure 2) .7 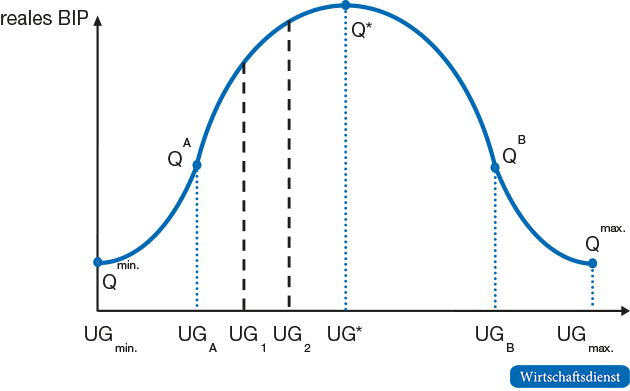 As usual in economic models, this causal relationship - whether the reverse is U-shaped or bell-shaped - is a ceteris paribus relationship. That means: Even if the income inequality of the economy is between UG * and UGmax. society's GDP may increase over time. This is e.g. This is the case, for example, when the capital stock increases as a result of an inflow of capital from abroad or a fall in domestic interest rates (K ↑), the workforce grows (L ↑) or the technological progress induced by international competition (TF) increases production capacities . All of these factors are location parameters that shift the curve upwards.

The crucial point for practical policy is how to quantify the income inequality at which “productive inequality” ends. As mentioned at the beginning, the empirical evidence is not clear. In recent years, the Organization for Economic Co-operation and Development (OECD) and the International Monetary Fund (IMF) have published studies that find a negative impact of income inequality on economic growth.9 These results sparked an extensive debate. Marcel Fratzscher, for example, agreed with these conclusions: “Scientific studies show how badly the inequality of income and wealth in Germany damages our economy and its productivity. The OECD estimates that the rise in income inequality since the 1990s has reduced German economic output by 6%. ”10 Other authors used these studies as an opportunity to carry out their own calculations on this connection. Some of them came to results that contradict the OECD and IMF studies. Galina Kolev and Judith Niehues, for example, state that their results “clearly speak against” “that income inequality in Germany is a negative growth driver” 11. A contribution by the Ifo Institute also demonstrates with "the help of an empirical analysis ... that for high-income countries there is a positive - and not a negative - relationship between inequality and growth" 12.

An increase in inequality over time from UG1 to UG2 thus results in a decline in the growth rate of real GDP, all other things being equal. Nevertheless, the GDP of UG2 is greater than that of UG1 (see Figure 2). So if the income inequality rises from UG1 in year 1 to UG2 in the following year, ceteris paribus this still causes an increase in GDP in year 2.

It is therefore always necessary to clearly distinguish whether growing income inequality reduces the growth rate of real GDP or the real volume of GDP. If the aim of society is to produce the maximum possible GDP under the given framework conditions, only the second development is problematic in the causal relationships assumed here. Therefore, even with an income inequality of UG2, an increase in income inequality in the following years up to UG * makes sense from a purely economic point of view - even if the growth rate of real GDP is lower ceteris paribus as a result.

A second methodological problem relates to the fact that the growth-influencing reactions of people to the distribution of income in their society largely depend on whether the distribution is perceived as it actually is and how the subjectively perceived distribution is assessed. Research suggests that both the perception of inequality and the assessment of perceived inequality can vary greatly in individual countries.13 These differences make it difficult to calculate the impact of income inequality on economic growth when working with data from many countries. Here is also a constructed example that only serves to clarify this aspect: Assume that two countries have exactly the same income distribution, which can be shown by UG * in Figure 2. Even in this case, the distributive-induced effects on the level of real GDP can be very different:

Overall, it can therefore be assumed that each country has its own UG * value, which, in addition, does not have to be constant over time. If, however, a corresponding econometric estimate is carried out with the data from many countries, the correlations are mixed up. This can then lead to incorrect conclusions about the growth effects of income inequality in individual countries.

Because of the methodological problems mentioned, it is difficult to precisely quantify the income inequality from which the area of ​​“productive inequality” ends. If there is an inequality, the extent of which is between UG * and UGmax. If the justification is to reduce the distribution of income, country-specific calculations would have to be carried out. However, the studies available to date on this issue usually work with data from many countries. From this, “no generally valid statements can be made” for the specific income and economic policy of a country 14.

It is also not possible to reliably assess whether Germany is currently still in the area of ​​productive inequality. The aforementioned calculations by the OECD and the IMF come to the conclusion that the growth-dampening effects of income inequality already predominate in Germany. Niehues and Kolev, on the other hand, refer to a global comparison of 113 countries. According to this, a positive correlation between income inequality and growth can still be assumed up to a value of the Gini coefficient of 0.35. With a Gini coefficient of 0.29, Germany is therefore still in the area of ​​productive inequality.15 Because “the results of empirical studies on the relationship between inequality and growth are subject to great uncertainty” 16, there is undoubtedly a need for further research.

* I would like to thank Manuela Barisic, Valentina Consiglio, Lukas Nüse and Dominic Ponattu for valuable suggestions and tips. Any remaining errors are the responsibility of the author.