What is the child's sensorimotor developmental stage

Movement belongs to every living being: Movement or motor skills are also the prerequisite for development progress in all areas in humans. Motor skills or movement represent the first and most important possibility of the human organism to react to its environment and to influence the environment, i.e. to change or shape its environment or to leave unfavorable environments or to seek favorable ones.

These developmental steps in the motor area were fundamental for the development of the cognitive, intellectual achievements of which we as humans are so proud, and they are thus ultimately the basis for the outstanding position of humans in evolution.

The development of motor performance

The child's motor development begins before the birth, from the 5th month of pregnancy onwards, movements of the fetus can be perceived by the mother and they become increasingly intense as the pregnancy progresses. Different reflexes are present in newborns, some of which are essential for the newborn's survival, e.g. sucking reflex, inspiratory reflex (allows drinking and breathing at the same time) and swallowing reflex. - The most spectacular of the reflexes present at birth is undoubtedly the Darwin reflex, which enables some newborns to cling to a horizontal rope with both hands, for example.

In early childhood - after the necessary maturation of the nervous and muscular system - the elementary motor skills develop, these include sitting, crawling, standing and walking, but also grasping (Krombholz 1999). These basic forms can be observed in all children, although there are considerable inter-individual differences in the time of occurrence and in the quality of these forms of movement shown, i.e. different children master these forms of movement at different ages. Age data for the occurrence of these forms of movement are therefore not without problems. However, the order in which the elementary basic skills normally occur is the same for all children, only the speed in which the individual developmental steps take place varies considerably, and individual skills can also be skipped (e.g. some children supposedly never crawl ). It should also be noted that the development of elementary motor skills obviously depends on the population and time. African children show a developmental lead over European and North American children, and today's American children are developmentally ahead of those 40 years ago.

In the pre-school age, the basic skills are increasingly perfected, at the same time these skills are modified and new skills are developed. The ability to move independently improves quickly, and the movements become safer and smoother. Later, the basic forms of sporting motor skills such as running or running, climbing, jumping, balancing, catching and throwing become apparent. The basic forms of sport are further refined, become safer and more fluid: They are also used and improved in movement games, and the basic forms are joined by new specific skills such as roller skating, gymnastics and dexterity exercises, swimming, cycling (Krombholz 1985).

Differences in motor development in boys and girls

On the basis of a longitudinal study with children of preschool age (Krombholz 2005, N> 440, age: 4 - 6 years) it could be shown that boys achieve better performance in tasks where strength and speed are important (standing long jump, pendulum run), girls against it in tasks that require balance and body coordination (balancing backwards, hopping on one leg). Girls are also superior in terms of fine motor skills, which require good eye and hand coordination.

In a longitudinal study of primary school age (Krombholz 1988, N> 700, age: 6 - 9 years), similar results were found: boys were superior in exercises in which strength and speed are performance-determining and in endurance (was not recorded in preschool age), Girls in terms of body coordination. Girls at this age also achieve better fine motor skills.

As examples of the development of performance separately for boys and girls, Figures 1 and 2 show the results for balancing backwards (dynamic equilibrium) and for standing long jump (jumping power). These data are based on a summary of the longitudinal studies by Krombholz in 1988 and 2005. 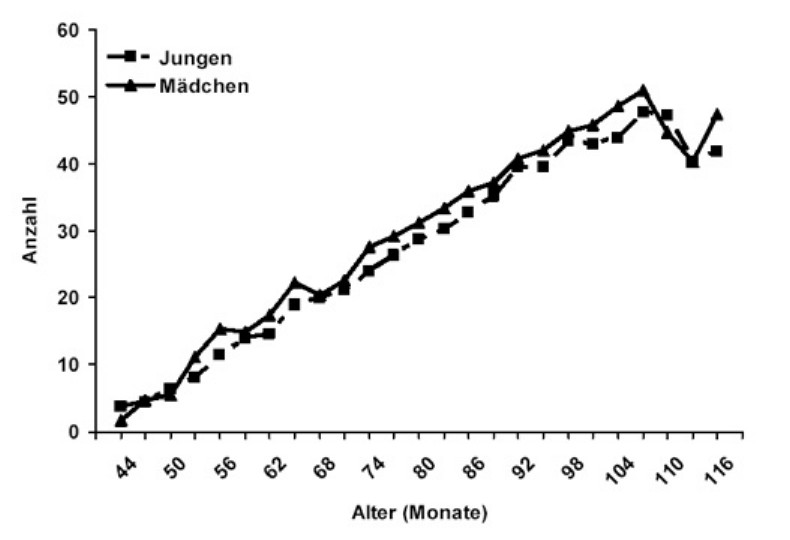 The extent to which the differences in motor performance between the sexes are based on genetic causes or different models and stimuli cannot currently be answered. However, it must be remembered that it is difficult to see why a possible better biological endowment of one gender (usually a superiority of the boys is assumed) does not have an effect on all athletic performances. The physical differences, e.g. in muscle mass, are only very small at this age and are only likely to have an effect after puberty. 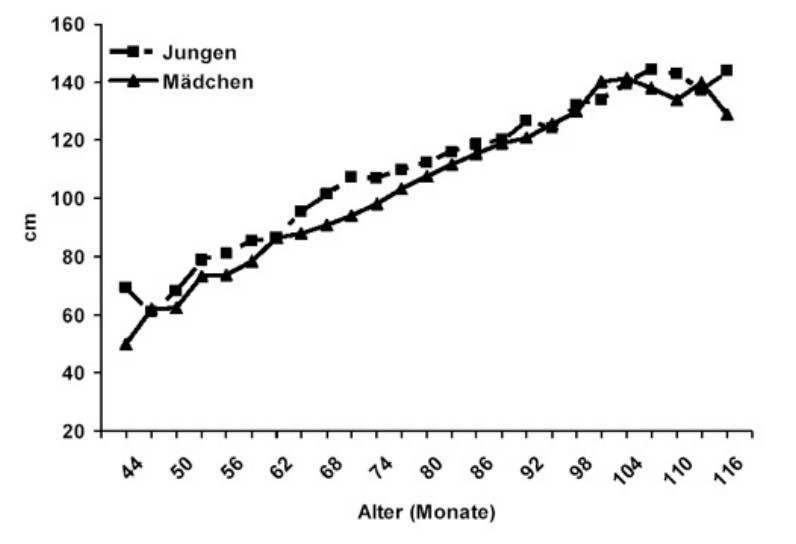 Humans deal with their environment through movement. Conversely, of course, the environment in turn affects the individual. It is therefore reasonable to suspect connections between the immediate physical environment, the social environment and the conditions in the family and motor performance development (Krombholz 1998).

There are test results on the following influencing factors:

It should be clear that these factors are by no means independent, which makes analysis difficult; so, of course, sporty parents are more likely to send their children to sports clubs than unsportsmanlike ones.

However, based on the research results available, no connection with motor performance can be proven for most of the factors mentioned. However, there is usually a slight superiority of children from upper social classes and a clear connection with the promotion of sport, usually attending exercise classes in sports clubs.

A longitudinal study of preschool age (N> 440, age: 4 - 6 years) showed that children from the upper social classes were superior in almost all of the motor skills tested, but the differences were not statistically significant (Krombholz 2005). In contrast, the children who occasionally or regularly attended exercise classes in sports clubs were clearly superior.

It must therefore be asked whether inhibiting factors do not negate the better conditions of the upper class children, e.g. the equipment with play and sports equipment and their better play opportunities in the home and in the open air. Such a factor could e.g. be the overprotective upbringing by the parents.

With regard to the obviously positive effect of attending training sessions in sports clubs, it must be left open whether the superiority is solely due to the club's influence. At the moment, it cannot be ruled out that above all athletically capable children go to the sports club or are sent by their parents and stay there.