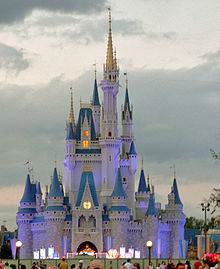 The Department Walt Disney Parks and Resorts was founded in 1971 as the second Disney theme park, the Magic Kingdom opened at Walt Disney World Resort in Florida and Disney formed a team that specialized in the maintenance of this park. The team was also supposed to maintain the then 16-year-old Disneyland in California.

The head of the department Walt Disney Parks and Resorts is James A. Rasulo, the former director of Disneyland Resort Paris.

There are currently 13 Disney parks worldwide in four different countries on three different continents (North America, Asia and Europe). They are divided into five resorts.

Walt Disney Imagineering (WDI) was founded as WED Enterprises (WED = Walter Elias Disney) on December 16, 1952 by Walt Disney. He commissioned a group of animators from Walt Disney Studios to design and realize the Disneyland Park.

The Disneyland in Anaheim, California was the first Walt Disney park to be established in 1955. The park was built as a nostalgic reproduction of an American city at the beginning of the 20th century. This idea was ultimately implemented in all Disneyland theme parks and can now be found under the name Main Street, USA.

In 1989 the 300 millionth visitor was counted; long time was with it Disneyland the most visited amusement park in the world until this title dated Tokyo Disney Resort was acquired.

The biggest Disney park is Walt Disney World Resort near Orlando, Florida, USA, which covers an area of ​​over 12,000 acres. It is also the largest amusement park in the world. Disney World opened in October 1971 and cost approximately $ 400 million to complete.

The Tokyo Disney Resort opened in 1983 and was the first Disney theme park outside of the United States. The park is located in Urayasu, Chiba Prefecture, about 15 kilometers from Tokyo city center.

In 2001 the park was expanded to include another theme park, the Tokyo DisneySea, expanded. The complex now called Tokyo Disney Resort also includes several hotels and a Disney shopping complex, the Ikspiari (read X-piari, as a play on the English word experience, which means experience).

The Tokyo Disney Resort is the most visited amusement park in the world, with nearly 17 million visitors annually.

The 1992 in Marne-la-Vallée, 32 kilometers east of Paris under the name Euro Disney Disney Park opened in 1994 Disneyland Paris renamed. The resort now has two theme parks, the Disneyland Park and the Walt Disney Studios Park (since the opening of the second park in 2002 Disneyland Resort Paris), a shopping area, ten hotels and a campsite. Almost 12.8 million visitors are counted annually.

The fifth Disneyland opened on September 12, 2005 in Hong Kong. It is 51% owned by the Walt Disney Company and 49% owned by the Hong Kong government.

It has four cruise ships, the Disney Magic, Disney Wonder, Disney Fantasy and Disney Dream, as well as a private island in the Bahamas called Castaway Cay. 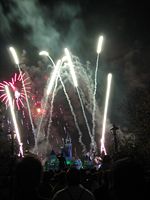 Believe-There's magic in the stars Fireworks over Sleeping Beautys Castle in Anaheim, California

Wishes is the name of the fireworks, which takes place every evening in the high season in Disneyland Paris and in the Magic Kingdom in Walt Disney World.

The fireworks have always taken place at night since the 2003 summer season. It has no laser effects, but Cinderella's Castle is illuminated in different colors.

Since 2005 there has also been a version of the fireworks at Disneyland Paris. The music and storyline are the same as in Orlando. The difference is that too Jiminy cricket (originally the companion of Pinocchio in the Disney film of the same name), the narrator of the story, nor the Blue Fairy which repeats the story all over again in French. For these extra scenes, parts of the original fireworks had to be cut out. The fireworks in Paris is not only the second largest fireworks display in Europe after “Rhine in Flames”, it is also the first fireworks laser show at all. 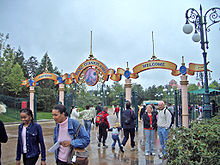 Entrance to the Paris Park

Disneyland in Anaheim and Walt Disney World Resort have their own game currency: the Disney dollars. This currency is one to one convertible with the US dollar and is voluntary. The currency therefore has more voucher status.

China's second Disney Park is currently being planned: Shanghai Disneyland. The official announcement was expected in 2008; 2012 is the expected opening year.