How do trade wars begin and end?

The current growth of the global economy is one of the highest in the last decade. In addition, GDP growth in the previous year basically extended to all countries and regions, from the euro currency zone to the USA, China and Japan to countries that are dependent on raw material exports such as Brazil and Russia. This was not customary before 2017 because there was always a group of countries that were not doing well economically for various reasons. In this direction, the prospects for strong economic growth for this year are also positive, but with a big question mark. That question mark is trade barriers and the possible negative spiral of trade barriers that could lead to a trade war.

The development of international trade has gone through phases of liberalization and the abolition of trade barriers at different speeds from the Second World War to the present day. The European integration of Europe, the founding of associations like NAFTA or WTO and China's accession to the WTO at the beginning of the 21st century were important milestones in the abolition of trade barriers and paved the way to greater economic prosperity. The way in which the liberalization of foreign trade has progressed can also be seen well from the following graph, which shows the increasing share of world exports in global GNP. 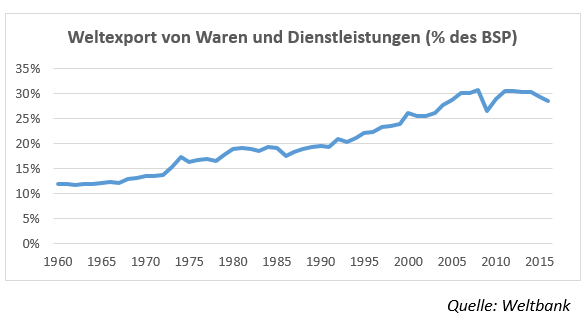 Now, in 2018, there is a real danger that the seventy year history of loosening barriers in international trade will be replaced by a period of protectionism. Incidentally, the impetus for the collapse of free world trade comes from a country that belonged to one of its guarantors, the United States. The paradox is that the US is resorting to protectionism at a time when the US economy has been growing for eight years in a row, the unemployment rate is the lowest in the US since the beginning of the 21st century, and protectionist policies are indeed likely to be the most the US itself, or the lower American middle class, would hit the hardest. The reasons for the introduction of the import tariffs in the US to bring jobs back to the US as well as in connection with the very low unemployment rate in the US seems to be very bizarre. So is the national security argument, which can be used to justify almost anything.

But also strange are the arguments that the US has significantly lower import tariffs than the other countries and that as a result American companies suffer from cheaper imports and unfair competition. The graph below shows that the industrialized countries have almost the same tariffs on average and the US even has a slightly higher average tariff than the EU and Japan. China has a slightly higher average tariff, which is partly justified by the lower economic level of this country and thus also by the higher pressure on the protection of local companies. In any case, China is also slowly liberalizing itself, but nonetheless in foreign trade. 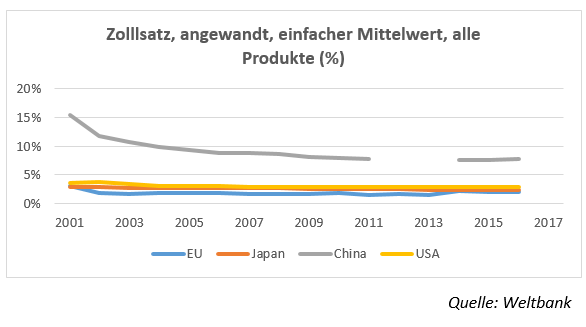 At this moment, at the end of March, it certainly cannot be clearly stated that the world is at the beginning of trade wars. However, we can safely say that the world has never been as close to trade wars as it is today in the past few decades. The coming months will determine whether we can stem the spiral of protectionism soon enough. Therefore, in this article, I am not evaluating the US tariff imposing in March on imports of aluminum and steel and the tariff imposing US $ 60 billion on imports of selected goods from China because it is not a closed chapter .

After the financial and economic crisis of 2008 and 2009, there were strong global concerns that the world was moving towards trade protectionism, which it did not in the end. The declaration of the then French President N. Sarkozy that protectionism is a dirty word is well known. The world managed to evade protectionism back then, but can it do so in 2018?