What does the world think of Tokyo

Headwind for the Olympics in Tokyo is increasing

If the population of Japan were to vote now - around two months before the start of the Olympic Games - there would be a crashing no for the sporting mega-event. In a nationwide survey by the Japanese news agency Kyodo, around 60 percent were in favor of canceling the games completely. In April the value was still 40 percent. Almost 90 percent of those surveyed now expressed concern that athletes and coaches from all over the world could bring the corona virus with them.

Within a week, more than 370,000 people signed one from the lawyer and politician Kenji Utsunomiya initiated petition to the International Olympic Committee (IOC). It calls for the games to be canceled "in order to protect our lives and well-being". A medical association representing 6,000 medical professionals from Tokyo also called on Prime Minister Yoshihide Suga to lobby the IOC for an Olympic cancellation. The hospitals had "their hands full and almost no free capacities" with the corona pandemic.

For a few weeks, Japan has been in a new corona wave, the fourth since the outbreak of the pandemic a good year ago. In the Olympic city of Tokyo and a few others, the corona emergency will initially apply until the end of May. Restaurants and bars are due to close at 8 p.m. local time and the population is called to stay at home.

Prime Minister Suga is under pressure. In the Kyodo survey, over 70 percent of Japanese people were dissatisfied with their corona policy. The vaccination campaign started far too late and is painfully slow, say Suga's critics. 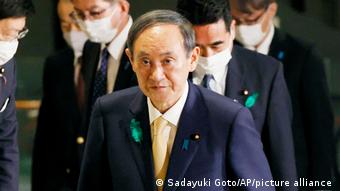 And then the Olympic Games as an additional risk factor? Suga is in a quandary: If the head of the Liberal Democrats cancels the games, a financial fiasco threatens - or perhaps a health problem, he sticks to them. And there are elections in October at the latest. Suga has stated that there is no way he wants to schedule her before the Tokyo Games. He fears defeat. If the Olympic Games were to go off halfway accident-free, the tide might turn for him.

How dense is the bubble?

According to the will of the Organizing Committee (OC) in Tokyo, the games will be played in an "Olympic bubble" from July 23 to August 8: the 11,000 or so athletes should be tested for the corona virus every day, keep their distance and if possible move little outside of the competition venues. Foreign viewers are largely excluded. The OK will decide in June whether anyone will be allowed into the ranks.

The Japanese Olympic starters are to be vaccinated from the beginning of next month. In Germany, the vaccination campaign for everyone who is supposed to go to the Games in Tokyo has been running since early May. The IOC assumes that the vast majority of athletes from around the world will travel to Tokyo vaccinated. Almost like a prayer wheel, the Olympic organization proclaims that the safety of the games will be guaranteed. And what about the miserable Olympic mood in Japan?

"The Olympic community around the world stands by Japan's side and is thinking of the Japanese people who are affected by the pandemic," the IOC said at DW's request. "It is only because of the ability of the Japanese people to overcome adversity that these Olympic Games are even possible under these very difficult circumstances. The spirit of perseverance is also the Olympic spirit." Will that convince the many Olympic skeptics in Japan?