Where all SQL error messages are stored

Error messages when backing up the database (Restore)

The SQL server that performs the backup runs in its own "Network Service" user account and therefore does not have the necessary access rights for the desktop or the "My Documents" of the logged-in user by default.

Remedy: Store the * .bak file in the "public documents" or similar in order to read it in from there, or in a new directory C: \ Backup or similar, including USB sticks and the like. are unproblematic.

To avoid this problem and to make restoring easier, the account in which the relevant SQL server service is running can be changed to the local system account (screenshot on the right).

With path (MOVE) and repeat the process.

If that does not help: perform the recovery using the Microsoft SQL Server Management Studio: 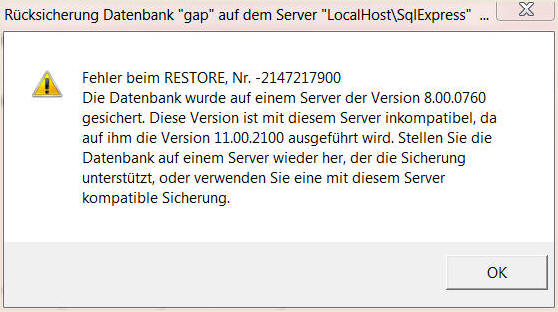 "Cannot save more than 64 databases."