What do you think of bass ukuleles

Welcome to the second episode of Let's Play Ukulele! Today it’s going to the practice! We will discuss the first chords and typical beat patterns.

Welcome to the second episode of Let's Play Ukulele! Today it’s going to the practice! We will discuss the first chords and typical beat patterns. Before we start with the grasping hand, you have the option of positioning the uke while sitting on one of the two thighs. Whether left, in the middle or right - you can see the most varied approaches here among international players. A good grip is always the most important thing! If you are unsure, use your left thigh as a support surface. If you want to keep it dead safe, you have the option of using a belt as well.

As you already know from the last episode, all guitar chords can be transferred to the ukulele because of the same string ratio of the four high strings. The fingerings are identical, only the chord names change. You just think of the two deep guitar strings on the ukulele.

The six most important chords for the ukulele come here, all of which come from the common key of C major, occur often and are not particularly difficult to grasp. If you want to play these chords in a very simplified way at the beginning, you can simply leave out the fingers in brackets in the graphics (see graphic 1-6). And here is the rule of thumb for converting the guitar chord names to the ukulele: Count up the guitar chord five semitones (= fourths) and you have the finished ukulele chord! Thus the ukulele chords have the following origin:

If you don't know the guitar fingerings, you will of course learn your first ukulele chords now. To get to know each other, you can play through the chords with one touch of the right hand each time you need to practice the change. Now to the chord progression: A really common chord progression that will serve as a “placeholder” for the grasping hand in the near future is C-G-Am-F. Countless hits are based on these chords in the key of C major or on the same chord levels (I-V-VIm-IV) in other keys. You will then change these chords for a whole bar!

It continues with the basics of playing beat patterns or chord accompaniment. In example 1 you can see a basic training for the right hand, the alternate strumming, on which the most common strumming patterns are based.

You see a 4/4 time that is filled with eight rhythm notes. Each notehead of these eighth notes represents a touch on the ukulele. The touch marks are located below the notes. With a slight twisting movement of the right hand, the fingers or fingernails hit the strings when striking.

It hardly matters whether only one finger or several fingers strike the strings. You will hit it with your thumbnail. Again, the movement comes from the wrist. Repeat this tact as often as you like to loosen your wrist and as a workout. By the way, a good sounding area to hit is the end of the fingerboard. As an aid, you can count to the attacks and / or use a metronome. Of course, the whole thing also works with a pick. Plastic picks sound a lot like a guitar and take a bit of getting used to on nylon strings ... Picks made of felt or leather would be the alternatives if you can't get by without a pick.

You can get even more useful tips & tricks about the ukulele from the experts at the Guitar Summit. Find out more about the big event here and secure your tickets!

The first common punch pattern in the Example 2 is relatively symmetrical and is perfect for quick play. Take the chord progression from above (C-G-Am-F) and apply the pattern over it with the finger-hitting technique mentioned. Change the chords in bars and try it out! The second beat pattern (Example 3) that you get to know is also a standard pattern. Pay attention to the space created in the middle by the tie! There is no impact mark here, so move your fingers or hand downwards without striking.

Playing sixteenth note beat patterns (see double bar) is basically the same as playing with eighth notes. The double number of notes and thus beats are now represented in one measure. They are therefore more varied; they are often played quickly. The first sixteenth note beat pattern in the score has a uniform structure, while the second is more varied. Again, change the chords in bars.

In Example 6 I will now show you a quick and easy way how you can create your own beat pattern to accompany: In the first step we completely fill an empty 4/4 time with eighth notes. You will now see eight continuous keystrokes. In step 2 we remove the stops, but leave the eighth values ​​as placeholders. Now you have eight continuous spaces. In the third step, I start filling in the placeholders according to my taste. First with two strokes, then after trying something with three more strokes (see step 4). You can now see clearly where attacks and spaces are to be played. Of course, the hand moves evenly up and down because of the same note values. If you have any initial difficulties, the numbers will help you. The last step 5 now shows the beat pattern, correctly notated, over which you play your chords. Try plenty, be free and creative! Why the tie in the middle over both notes and not a dotted quarter note? A “visible center” in the cycle makes it easier for us to grasp the characters. 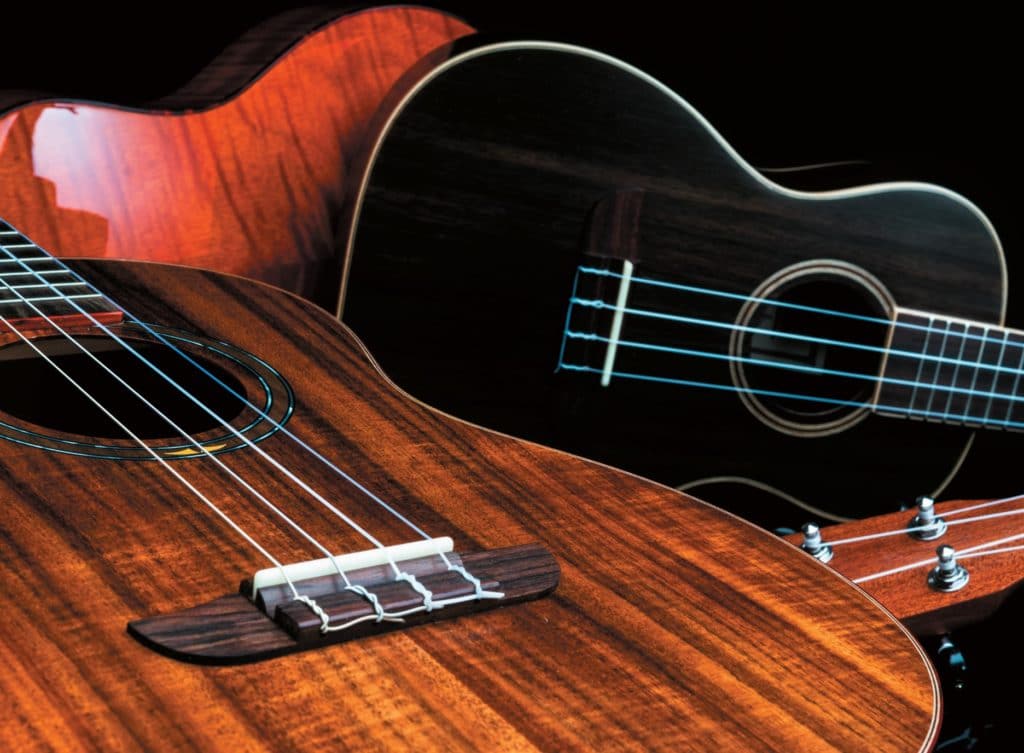 Like you in Example 7 can already see, the basic principle does not change with the sixteenth notes - the procedure is the same! Compared to the eighth note striking patterns, you have of course more options available. For easier reading, the notes are grouped into four blocks of four notes each, the counting method is adjusted accordingly. Pay attention to the punctuation marks, then nothing can go wrong. Once you have your own pattern ready to go, repeat it over and over to practice the transitions!

... usually work the same way in 6/8 time and are easier to create than expected! To make things straightforward, I'll take a beat pattern of 4/4 time and just shorten it at the end. We actually only delete the "value" of a quarter note from the measure and we already have the length of a 3/4 measure. It doesn't matter whether breaks or notes are canceled! Our very first punch pattern Example 2 serves as a template. In Example 8 you see the already modified punch pattern. The missing two eighth notes at the end, which together make up a quarter, are clearly visible. Feel free to use the counting numbers as a check - a really simple matter as you can see. The other patterns can of course be rearranged in the same way. Compare and remember all the beat patterns from today's episode, then you can use them specifically and apply them more easily in different songs! In Episode 3 I'll then show you how to upgrade ukulele beat patterns. We'll also discuss beat patterns to be played on tenor ukuleles with low-G tuning (with a low G-string). You can send questions, suggestions and criticism to [email protected] Have fun trying it out, good luck and see you next time!

Would you like more workshops on the topic of ukulele, guitars, amps & more? Then come to the Guitar Summit and learn directly from experts, manufacturers and well-known artists. Check the program now and secure your tickets!