Microbiota - health protection in the gut

Our intestines are home to around 100 trillion microorganisms. If we eat properly and maintain a healthy lifestyle, the small sub-tenants thank us with a strengthened immune system and protection against various diseases. 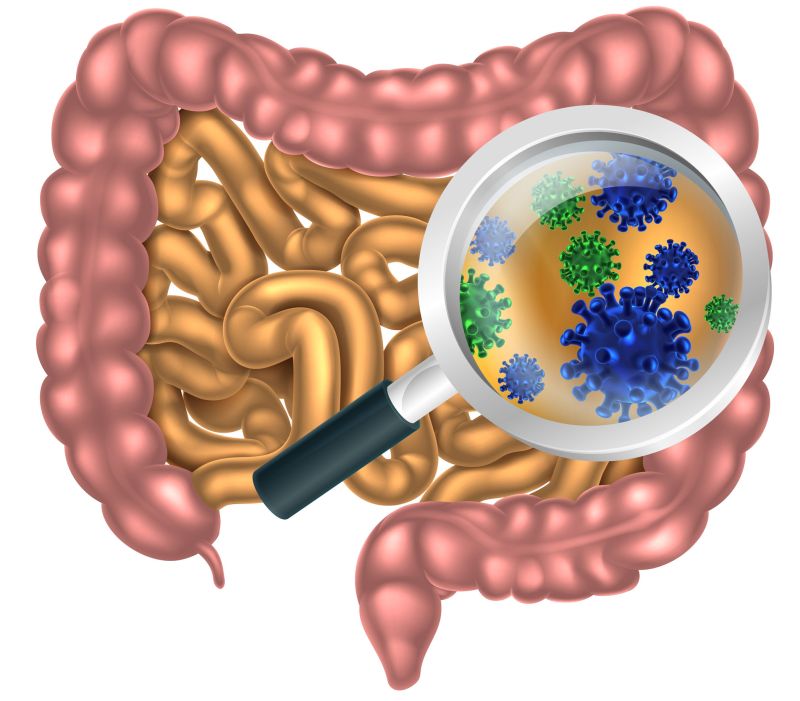 The entirety of the microorganisms that colonize our digestive tract is now known as the intestinal microbiota - formerly the intestinal flora. Bacteria make up the main part with 98 percent. In addition, primordial bacteria (archaea) and eukaryotes (multicellular cells such as yeasts) are also represented. The number and density of microorganisms increases continuously from the stomach to the anus. The vast majority of bacteria are therefore found in the large intestine. A total of 1000 to 1500 different types of bacteria have been found in the intestine so far. However, each person harbors only one individual pattern from around 100 to 200 different species. The microorganisms together have 150 times more genes than our own body. The entirety of all microbial microbes including the genomes (DNA) in the human organism is called the microbiome.

Influence on metabolism and the immune system

The intestinal lumen - i.e. the inside of the intestine - is connected to the rest of the body. Biologically active substances of the bacteria can enter the bloodstream via the mucous membrane and the connected vessels. Therefore, the intestinal microbes not only affect the digestive tract and the intestinal-associated immune system. They also affect the body's metabolic processes and even the activities of the brain, such as the formation of neurotransmitters. Scientists now see diseases such as irritable bowel syndrome, inflammatory bowel disease, allergies, obesity, diabetes and depression in connection with the microbiota.

The colonization of the intestine begins at birth, depending on the birth route. In normal birth, the first colonization occurs through the mother's vaginal bacteria. In children born by caesarean section, environmental germs and the skin microbiota of the contact persons determine the first colonization. The infant's nutrition shapes the further development of the intestinal inhabitants. In the first two years of life it is subject to particularly strong fluctuations, only then does it become more stable. In adulthood, the microbiota is relatively stable under constant environmental conditions. It turns out that a diverse microbiota has the highest resistance to external influencing factors. However, certain medical conditions and medications, lifestyle, and major dietary changes can upset the balance

Science is still a long way from knowing what a healthy microbiota is. Given its complexity, research is still in its infancy. It should be remembered that the intestinal microbiota is an ecosystem that is subject to constant change. To a large extent, it is difficult to access and the metabolic activity of the microorganisms is extremely variable in terms of which substrates are metabolized and which compounds are formed. Most studies are based on analyzes of the stool and therefore mainly represent the situation in the last part of the colon. The microbiota of the upper large and small intestines, on the other hand, has so far hardly been researched.

Nevertheless, some characteristics of a healthy microbiota can be derived. Protective - i.e. protective - types of bacteria predominate, harmful microbes only occur to a small extent. Bacterial species that stabilize the intestinal barrier - the protective shield function of the intestine - and do not form any harmful substances are protective. These are predominantly gram-positive bacteria that break down dietary fiber and use it to form short-chain fatty acids. These in turn have an anti-inflammatory effect and strengthen the intestinal barrier. They are encouraged by a high-fiber diet rich in vegetables, legumes, and whole grains.

In contrast, gram-negative bacterial species that contain lipopolysaccharides in their cell wall are particularly harmful. These cell wall components can cause inflammation in the body if they penetrate the intestinal barrier and enter the bloodstream. Bacteria that break down proteins or form messenger substances that promote inflammation are also considered unfavorable. These rather harmful bacteria feel particularly comfortable on a low-fiber diet with plenty of saturated fatty acids. If food hygiene is inadequate, more of them end up in the intestines.

Useful table companions in the intestine

We maintain a special relationship with the bacteria in the intestine, which is expressed in the term commensal microbiota. Commensalis is the Latin word for table companion. We live with them in a kind of symbiosis in that we provide them with food and they protect us from pathogenic invaders. Even if the connections between nutrition and microbiota have only been explored to a limited extent, some food factors are emerging that have an influence.

Soluble fiber is the main food source for the bacteria. A high fiber content in the diet increases the diversity in the microbiota and promotes the activity of beneficial, butyrate-producing bacteria. While the insoluble fiber passes through the intestine more or less unchanged, the soluble fiber is largely used by the bacteria to generate energy. In addition to gases such as hydrogen and methane, short-chain fatty acids such as acetate, propionate and butyrate are also produced. These are considered to be key substances for health because, on the one hand, they are involved in the formation of satiety hormones and, on the other hand, they strengthen the intestinal barrier, as they are the most important source of energy for mucous membrane cells.

Whole grain cereal products are a significant source of fiber. In a clinical study, the daily consumption of whole grain products for a period of eight weeks promoted the growth of bacteria of the genus Lachnospira, which produce short-chain fatty acids. At the same time, inflammatory (pro-inflammatory) enterobacteria were reduced.

Prebiotics are a subgroup of fiber that can only be used by health-promoting bacteria. These include above all inulin, oligofructose and galactooligosaccharides. The term prebiotic may only be used by food manufacturers if the health benefit has been proven. Although there is a lot of international evidence of effectiveness, no health claims are currently permitted for prebiotics in the EU.

Polyphenols are another component of plant-based foods that have a positive influence on the microbiota. They are among the secondary plant substances. A particularly large subgroup of the polyphenols are the flavonoids, which give many vegetables and fruits as well as drinks such as red wine, coffee, tea and cocoa their color. Due to their antioxidant, anticarcinogenic and antimicrobial properties, flavonoids are ascribed preventive effects, especially with regard to cardiovascular diseases. It is astonishing, however, that only 5-10 percent is taken in from food. Conversely, this means that 90-95 percent remain in the intestine. Clinical studies provide initial indications that fruits and nuts rich in polyphenols promote the occurrence of beneficial bacterial species in the microbiota. In a placebo-controlled cross-over study, consumption of polyphenol-rich blueberry juice resulted in an increase in various types of beneficial bifidobacteria in the subjects' stool. 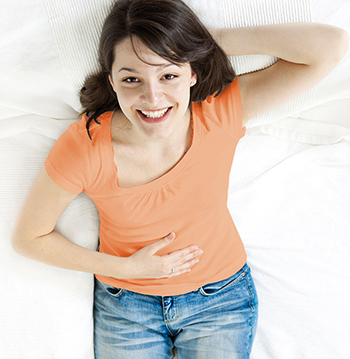 All around intestinal health - theory and kitchen practice

In this seminar you will learn how the intestine can be supported in its work and what influence diet has on our immune system. The advanced training is suitable both for personal provision and as a deepening for your advisory practice.

Red wine is known for its high flavonoid content and the mechanisms behind its preventive effects have long been puzzled. In a Dutch study in 2016, scientists found a connection between the consumption of red wine and the proportion of Faecalibacterium prausnitzii, which is one of the butyrate producers and has anti-inflammatory (anti-inflammatory) effects. There is increasing discussion among experts as to whether the preventive effect of a Mediterranean diet may also be based on its influence on the microbiota. Some typical Mediterranean foods such as olive oil, vegetables and herbs are characterized by their richness in polyphenols. In fact, Italian researchers found that test subjects had a higher content of short-chain fatty acids in their stool when they preferred a Mediterranean diet.

Fermentation is one of the oldest methods of preserving food. Studies show that the bacterial cultures used for this are also found in the microbiota. Of all fermented foods, yogurt has the highest bacterial density. As early as 1907, the physician and Nobel Prize winner Ilja Metchnikoff propagated that regular consumption of yogurt promotes health and extends life. More than 100 years later, long-term studies confirm his assumption. Researchers showed that sour milk products can help protect against diabetes and colon cancer.

Recommendations for the microbiota

So far, however, there are only a few studies that investigated the effects of conventional sour milk products such as yoghurt and curd milk on the microbiota. In contrast, foods with special bacterial cultures called probiotics are better studied. According to the definition, probiotics are preparations with living microorganisms that have a positive effect on health if they are consumed in sufficient quantities. They lower the pH value and improve the intestinal environment, inhibit pathogenic microorganisms, strengthen the intestinal barrier and modulate the immune system. Lactobacilli and bifidobacteria are mainly used for probiotic milk products, which have a higher acid tolerance and therefore largely survive the transport through the upper digestive tract.

Numerous studies and meta-analyzes prove the effectiveness of probiotics, for example in the prevention of respiratory infections and diarrheal diseases as a result of antibiotic treatment. In irritable bowel syndrome, probiotics have been shown to relieve symptoms such as pain or gas. In the guidelines on constipation and irritable bowel syndrome, probiotics are expressly named as a therapeutic option. The IBS guideline recommends selecting the bacterial strains according to the dominant symptom. However, the user should be patient. In many studies, the effect only set in after consistently taking it for two to four weeks. However, an optimal effect can only be expected in the context of an overall intestinal healthy diet. Despite the large amount of international evidence for the effectiveness of probiotics, no health claims for probiotics are currently permitted in the EU. The term probiotic is also currently not allowed to be used in the EU for food and dietary supplements.

It can be assumed that (almost) everything we eat and drink affects our microbiota. That is why the intestinal bacteria should be included in all considerations as important comrades-in-arms on the field of nutrition and health.

This article was published in:
UGBForum / special
Diet prevents special