When was the Battle of Saratoga

From Hubbardton to Saratoga

The events that led to the end of the war for the majority of the Braunschweiger now rolled over in quick succession. On August 16, 1777, Braunschweig troops, including the light infantry battalion v. Barner, again on the rebels. General Riedesel advised against an immediate attack, the enemy seemed to be vastly outnumbered, and his own main army was still too far away. Nevertheless, the British Commander-in-Chief gave General Burgoyne the order to advance. It turned out that the rebels had gathered more than 2,000 men under General John Stark, who immediately attacked the British-Brunswick detachment from several sides. After a short time the provincial troops loyal to the king fled and left the Brunswickers alone. The latter suffered losses of around 200 men, some of whom were killed, wounded or taken prisoner. In the end, the Brunswick had to withdraw, and the Americans added value to this success - reports spoke of more than 1,000 dead, although just under as many Brunswick were involved. 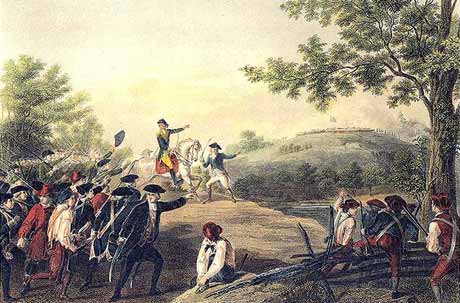 The situation of the Allied army deteriorated dramatically as supplies from Canada no longer reached the army because the access roads were blocked by the rebels. The 6,000-strong army was surrounded by around 22,000 rebels. The advance of the army encountered strong American fortifications at Freeman's Farm near Saratoga. On September 19, 1777, the first battle of Saratoga took place at this farm. They managed to stop the Americans and drive them off the battlefield. The Braunschweiger distinguished themselves again and suffered only slight losses. The success achieved was not exploited by General Burgoyne, however, the retreating enemy not pursued further.

On October 7, 1777, General Burgoyne sent 1,500 men from his army to explore the Saratoga area. It came to the 2nd Saratoga Battle, this time at Bemis Heights. The Allied army, including the Braunschweig troops, suffered heavy losses, including the British general Simon Fraser (1722-1777), on whose death the wife of the Braunschweig commander v. Riedesel, Friederike Charlotte Louise Riedesel Freifrau zu Eisenbach, reported in her diary as follows: "At about 3 o'clock in the afternoon, instead of my guests having come to me for dinner, they brought me poor General Fraser, one of the expected lunch guests, on a stretcher , fatally wounded. Our dining table, which was already set, was taken away, and a bed was put in its place for the general. I sat in a corner of the room, trembling and trembling. The noise got louder. The thought that one could bring my husband to me like that was terrible and tormented me incessantly. The general said to the surgeon: 'Don't keep anything from me! Do I have to die?' The bullet had just gone through his body (...). I often heard him exclaim with a sigh: 'Oh bad ambition! Poor general Bourgoyne! Poor mistress Fraser!' (Fatal ambition! Poor General Bourgoyne! My poor wife!) He was prayed for; then he asked General Bourgoyne to ask him the next day, at 6 o'clock in the evening, on a mountain that was a kind of hill want to be buried. "

Death of General Fraser - painting by John Graham, circa 1777

On the right side of the British camp there were two entrenchments, the outer one of which was defended by around 300 grenadiers under the command of Lieutenant Colonel Heinrich von Breymann. In the course of the battle the Americans managed to bypass the hill held by Breymann's men in order to attack the Braunschweiger in the rear. In a short but fierce battle, the hill was taken, whereby Lieutenant Colonel Breymann was killed and the American General Benedict Arnold was wounded. 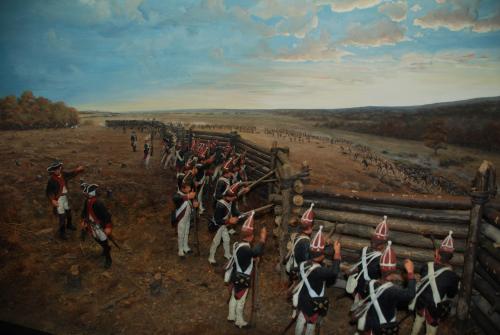