What was your favorite coffee machine

An old steam iron no longer produced steam, but suffered from incontinence. After disassembling it, we could see that it was very dirty. After intensive cleaning, however, we had to give up because the rubber seals on the steam unit and the tank had become porous. Unfortunately there was nothing left to repair.

In the case of a cordless screwdriver that could no longer be switched on correctly, the switching contacts were set and now it does what it should again.

The power supply for a freezer was weak and did not deliver the required 13.9 volts. During troubleshooting, it turned out that the switch contacts were badly "frizzled". We cleaned up the contacts and recommended the owner get a new switch and come back with it.

A Grundig "KW5040" kitchen scale only occasionally showed something on its display that was barely recognizable. The display was connected to the main circuit board via a glued-on ribbon cable. Unfortunately, the bond had come loose and the connections were no longer reliable. Unfortunately there was nothing for us to repair. 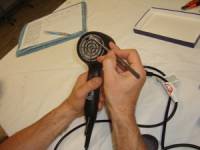 An “RCY 91-M” hair dryer simply switched itself off after a few minutes of use and did not go back on immediately. After we removed the cover of the air intake, we saw that the hair dryer was very dirty and not enough air was blowing past the heater. This made the device too hot and the thermal switch protected it from overheating. We cleaned the part of all the fluff and hair and then he blew hard and permanently again.

A dad was with us in his son's remote-controlled car, which was no longer driving. The remote control still worked, the steering worked, but the car persistently stood still. We found a loose motor connection. After the cable was soldered back on, the car drove again as before.

A Blaupunkt “CC 825” video camera apparently first had to be “kissed awake” from its “deep sleep”. It was in the owner's closet for several years and now showed some signs of failure. Among other things, the tape did not work. We tried the various functions several times and gradually brought all the functions of the device back to life. In the end we could not find any defect.

A Rommelsbacher "EKO 364 / E.2" espresso maker gave its owner the cold shoulder and no longer wanted to prepare hot espresso - the heating simply stayed cold. It also turned out to be defective during troubleshooting. Unfortunately we could not fix it due to a lack of spare parts.

A Silvercrest handheld vacuum cleaner no longer worked. He was already nine years old and after this time the NiMH batteries were used up. They could no longer be recharged. If the owner comes back with new batteries, we can replace them and get the device working again.

One visitor was no longer able to shape her curls as usual with the “Volume Curl 200” hot air curling iron from Petra Electric. It just couldn't be switched on anymore. After opening the device, we saw the "scorched" contacts on the switch. We cleaned them up and hired them again. Now the part works again and will hopefully ensure great curls for a long time to come.

A cassette recorder "RFT R4100" could no longer hold up some of its keys, which made playing cassettes impossible. In addition, the rubber belt was worn, the dial lamp no longer shone and radio stations could not be tuned either. Once the owner has obtained the spare parts, things can go on.

We were able to avoid 10 kg of rubbish today.

Many thanks to a visitor who brought home baked plum cake.