Tobacco is allowed on Survivor

TV channels in Turkey are already subject to censorship: no alcohol, no cigarettes, no homosexuality. Now it's the turn of Netflix and social media. 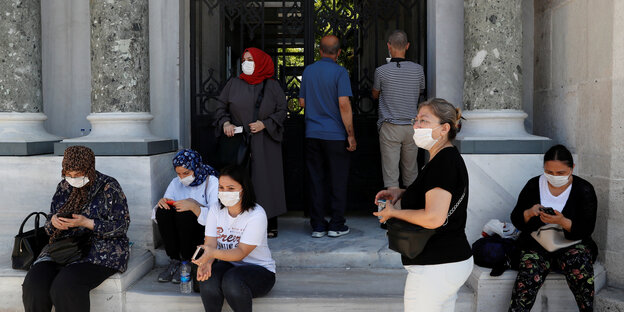 Always online: Parents are waiting for their children at the entrance to Istanbul University Photo: Murad Sezer

First print and television. Now the internet. Step by step, the Turkish government is narrowing media and cultural freedom. The majority of conventional media companies are now owned by government-related corporations. Only a few small and medium-sized publications try to counter this.

They are able to do this because the Internet exists. But the network is not invulnerable either. This is shown by two current events. A good two weeks ago it became known that the production of a Turkish Netflix series had been canceled after Turkish authorities intervened in the script. This week the Turkish parliament passed a new internet law that threatens existing freedoms in social media. The powerful have long known about the unruly, globalized, difficult-to-control character of the Internet. They now want to eliminate this last space for contradiction - with all its political, creative and cultural forms of expression.

Reed Hastings, founder and managing director of the streaming platform Netflix, once said: “We are in Saudi Arabia. We are in Pakistan. If there are no problems there, will we have problems in Turkey? I can not imagine that."

A bold statement. Because after the dejected Gezi protests in the summer of 2013 there is nothing in Turkey that is unimaginable. Since August 2019, Netflix and other streaming services have been officially controlled by the Turkish media supervisory authority RTÜK and have to obtain a license from it. It didn't take long for this control to take effect. At the end of April 2020, the seventh episode of the second season of the series "Designated Survivor" disappeared from Netflix's Turkish offering. As a result, a fictional American president argues with a rebellious fictional Turkish president. The latter threatens to leave NATO.

Too gay for the ministry

Recently, the screenwriter Ece Yörenç announced that she had not received a filming permit for the Turkish Netflix production "If Only" (Turkish: "Şimdiki Aklım Olsaydı") because one of the characters was gay. In addition to supervision by the RTÜK authority, which controls and sanctions media products after they have been broadcast, foreign productions must obtain such permission from the Ministry of Culture and Tourism.

"There is the idea that international media wanted to harm Turkey"

Screenwriter Yörenç told the Turkish cinema magazine Altyazı Fasikül, that the ministry hadn't justified its decision, but the team got approval the moment they removed the gay character from the script. However, after a meeting with the RTÜK media regulator, Netflix decided to cancel the production.

This was followed by rumors that Netflix wanted to withdraw from the Turkish market. Hard to imagine, since the provider had 1.5 million users there at the end of last year and Turkey also has the growth potential that is so important for Netflix.

In any case, when asked by the taz, a company spokesman said no. “Netflix remains deeply committed to our Turkish members and the creative community in Turkey.” Several Turkish productions are currently running, with more to be launched soon. The responsible ministry meanwhile left a request from the taz unanswered by the editorial deadline. The interference is not surprising, it is by no means new that the media authority imposes fines and broadcast bans after broadcasting. But with "If only" the intervention took place before production started.

Bilge Yesil is Professor of Media Culture at the City University of New York. She is neither surprised by the censorship nor the reaction of the streaming provider: "After all, Netflix is ​​a profit-oriented company that does not want to lose a growing market like Turkey." Yesil researches international media representation and global media strategies in Turkey.

According to Yesil, Netflix in Turkey is an alternative to conventional TV channels, especially for younger people, which are subject to strong censorship, where alcohol or cigarettes are not allowed to be shown. "What you can't see on Turkish television today, you can see on Netflix," she says.

It is no secret that the Turkish government has a problem with LGBT people. Pride demonstrations have been banned for years. Conservative commentators repeatedly complain that Netflix series encourage homosexuality.

But the authorities are concerned with even more, says scientist Yesil: “There is the idea that the international media are concerned with harming Turkey; as if Netflix had been brought to Turkey by some higher force with a specific mission. "Yesil recalls conservative resentments against Hollywood productions:" It was often said that American films sent hidden and subliminal messages to young people and so did the youth Depictions of sex, alcohol, drugs or horror poisoned. ”The current censorship thus appears as an expression of a paranoid cultural anti-imperialism.

"Another Turkey is possible" - Interviews, reports, comics, graphics, photo series and satires that show that the future of Turkey is far from being decided. The taz Gazete Journal is available in the taz shop.

And part of this imagined, global, especially Western conspiracy against Turkey, are also social media such as Twitter, Facebook and Instagram. On Wednesday morning, after hours of debate in parliament, a new Internet law was passed before the summer break.

There has been censorship online in Turkey for a long time, but the new law allows authorities not only to block content, but to remove it immediately. In addition, Twitter and Co. are to open a representation in Turkey and save the data of users in Turkey. If they don't cooperate, they face fines and the throttling of Internet bandwidth by up to 90 percent.

Proponents of the law repeatedly cite the German Network Enforcement Act of 2017 as a model, but supplemented by statements such as those of AKP parliamentary deputy Cahit Özkan, who said in parliament on Tuesday, "the completely arbitrary, unaccountable and demanding many victims Media “should be brought under control. Saruhan Oluç, parliamentary group vice-president of the opposition HDP, criticized the law with the words: "This is not the German, but the Chinese model."

Gülşah Deniz-Atalay, an expert on information law, tells the taz that the Turkish government wants to create “a clean Internet”, “in which the right to be forgotten is reversed and the government can forget its own corruption and inconsistent statements”. Netzexpert: Inside Turkey are skeptical when it comes to the question of whether the network services will bow to the new law. After all, Twitter, Facebook and Co. have a reputation to lose. And Turkey is not the only country with authoritarian tendencies.

Why is the offensive against the net coming right now? Maybe because the government is weak. Like the controversial conversion of Hagia Sofia into a mosque, the hastily passed Internet law seems like an act of desperation, a hasty message to a crumbling base. Erdoğan's government has little to gain. She has many young voters to lose, who are not an unimportant factor in young Turkey.