What is the way the engine works

An overview of all automotive technology topics.

Here technical basics are explained in an understandable way for the layman!
We deliberately refrained from detailed explanations of complex relationships.

As the name suggests, the two-stroke engine - in contrast to the four-stroke engine - creates a complete work cycle during one crankshaft revolution. No valves are required for the gas exchange. The gas exchange is controlled by the piston and slots in the cylinder wall; the crank chamber below the piston is used to pre-compress the fuel-air mixture.
Valves, camshaft, timing belt / chain etc. and all that stuff is not needed!

There are also exotic species that have an outlet valve, and there is also a distinction between the "purging processes" of gas exchange in countercurrent purging, cocurrent purging, reverse purging, etc. This and the various inlet control systems should not be of interest to us at this point, where the basic functionality is to be explained. 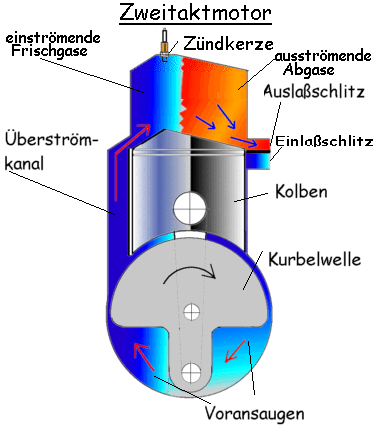 1st bar
The pre-compressed fresh gases flow into the combustion chamber via the open overflow duct and press the exhaust gases out of the exhaust duct. When going up, the piston first closes the overflow channel, then the outlet slot.
When the piston goes up, a vacuum is created below the piston, which sucks the fresh gases into the crank chamber as soon as the lower edge of the piston releases the inlet slot.
2nd bar
Shortly before TDC * the spark plug ignites the mixture. The piston is pushed to BDC by the expanding, burning gases. First, the piston opens the outlet slot before the overflow channel is released again.
The downward moving piston closes the inlet slot with the lower edge. The fresh gases are pre-compressed.

Dead points are the reversal points of the piston:

The great advantages of the two-stroke engine are the simple, inexpensive construction, few moving parts and the higher performance with the same displacement compared to the four-stroke engine. Higher speeds can also be achieved.
However, sufficient lubrication of the crankshaft - around which the fuel / air mixture flows - must be ensured. This is usually achieved by adding oil to the fuel. A so-called "mixture" is filled up.

Reciprocating engines have one major disadvantage:
The piston is continuously accelerated to a monkey tooth, then decelerated to zero and accelerated again in the other direction. This is of course ineffective, costs energy and stresses all components.
What could be more obvious than to design a motor whose piston already makes a circular movement and does not have to be braked!
The piston of the Wankel engine makes an almost circular movement and is therefore also known as a rotary piston engine or rotary engine.

The engine consists of three chambers, an eccentric shaft takes on the role of a crankshaft. In each chamber, a work cycle is carried out one after the other according to the four-cycle mode of suction, compression, work and discharge. The piston movement ensures the corresponding enlargement / reduction of the chambers. The gas exchange does not take place via valves, but via inlet / outlet channels. Ignition is initiated by a spark plug. 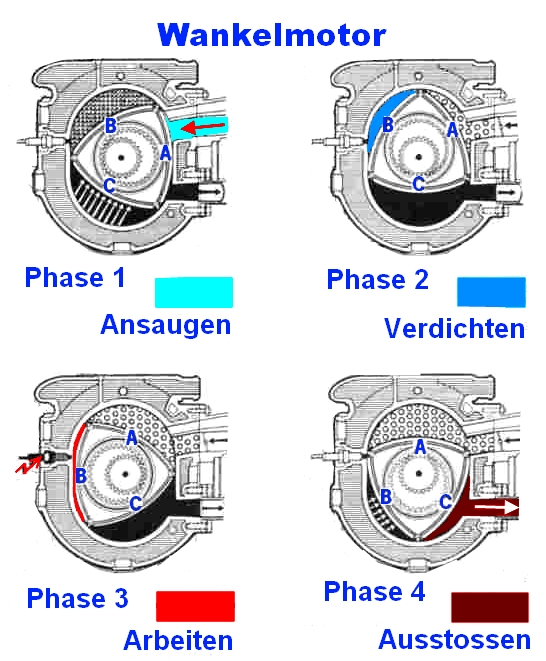 Not that easy, but with the sketch and animation on the right, the functional principle becomes clear. The piston has just completed 1/4 turn in the phases described.

For the sake of completeness, I would like to mention the Stirling engine, which is still underestimated in its possibilities!
Basically, this engine works according to a completely different functional principle of all the engines presented here, with external combustion or external heating.

Since no vehicle (known to me) is equipped with such an engine, I would like to refer those interested to the website of Peter Fette, who explains the function really well.

Any questions on these topics? Ask your questions in our auto forum.

Help others with your knowledge and experience or simply exchange ideas with other car friends.
<?