Illegal: Sky and international TV tried out via IPTV

It sounds tempting: for a calculated 5.99 euros per month, you can not only receive all the major German free TV channels, but also the programs of the pay TV channel Sky, the new Bundesliga channel Eurosport 2 HD Xtra and, last but not least, a large number from TV stations from abroad - including pay TV channels from Great Britain and the USA, which show films and series in the original English version. This is exactly what advertises NecroIPTV, one of numerous IPTV portals on the Internet.

Another, comparable service is called ACE IPTV. Not that many programs from Germany are available here. But there are even more channels from English-speaking countries. Here the customer can decide whether, for example, he only wants to receive sports channels or use the entire program package. Those who commit themselves for a whole year are included with 52 or 70 British pounds - the equivalent of 57 or 77 euros, depending on the package chosen. 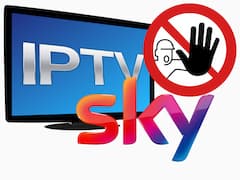 Illegal IPTV portals tested
Graphic: teltarif.de, Logo: sky These and other comparable services have one thing in common: it is not legal to retransmit television programs this way. This applies in particular to pay-TV programs such as Sky, BT Sport or OSN, but in principle also to free-TV channels. It is not for nothing that Austrian Broadcasting, for example, sends its domestic TV programs encrypted via satellite. The ORF acquires broadcasting rights, for example for feature films and sports broadcasts, only for its own broadcasting area and must therefore prevent reception abroad as best as possible.

Nevertheless, we wanted to know how well the illegal streaming offers are working on the Internet. As a rule, the organizers provide customers with a playlist in the form of an m3u file into which all programs activated for the user are integrated. If something changes in the channel list, the content of the m3u file also changes so that the customer always has an overview of the current program portfolio. 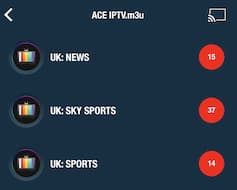 Programs clearly sorted in sub-folders
Photo: teltarif.de The m3u playlist can be used on the PC or Mac, for example in the VLC media player, so that all programs that are available on the respective streaming platform can be called up here. Apps such as GSE IPTV or Smart IPTV ensure that the streaming channels can be received quite easily on a smartphone or tablet or with set-top boxes such as Amazon Fire TV and Apple TV or directly on a Smart TV.

The operation of these apps is self-explanatory and for use on a streaming box or on a smart TV there is also web-based access, via which the respective m3u playlist can be integrated. We tested ACE IPTV and NecroIPTV with a Sony Smart TV and an Amazon Fire TV as well as with iPhone 7 Plus and iPad Pro 9.7 and with the Samsung Galaxy S8 + Duos. A VDSL-25 connection was used for this. The television and the Amazon Fire TV were connected directly to the Internet via a network cable, the mobile devices were connected via WLAN.

At first glance, the offers are quite impressive. ACE IPTV shows 2782 available channels, with NecroIPTV there are at least 1271 programs. However, these are not always "real" TV channels. Instead, for example, entire series series can be called up on demand and in the original English version. The Netflix logo, which we encountered several times in the test, indicates that the IPTV operator does not see it as closely with copyright here either.

ABC News from the USA via streaming app
Photo: teltarif.de With the large number of available channels, zapping through the programs can quickly become confusing, with both organizers offering not only an overall list but also sorting, for example, according to German and English, British and American, Irish and Arabic stations. This makes it possible to target those programs that you are currently interested in.

If you are initially overwhelmed by the variety of programs as a new customer, frustration quickly arises when you try to use it seriously. If a station appears in the channel list, that does not mean that it can actually be received. Often you only see a still image or the screen just stays black. We observed this in the test especially with programs that were streamed in full HD quality (1080p).

But even with channels with a lower resolution, it is by no means said that the stream remains stable for the duration of a full feature film or football match, for example. Nothing is more annoying than a stream interruption precisely when the scene is most exciting. Admittedly, this can also happen with legal TV streaming, as the example of the botched Bundesliga exclusive start by Eurosport shows. Such effects are much less common here. 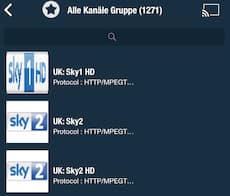 English pay TV channels on NecroIPTV
Photo: teltarif.de When trying to watch English football matches in the evening via NecroIPTV, there were frequent dropouts. Apparently the illegal streams picked up by Sky Sports UK were overloaded. At the same time, we followed the transmission of the same encounter in the legal offer from DAZN. Here the streaming was stable over the entire 90 minutes - with very good transmission quality.

As the test has also shown, users cannot rely on the fact that a program available today on ACE TV or NecroIPTV will also be available tomorrow or next week. Technical problems with the retransmission of individual channels are often only significantly delayed, in individual cases not even noticed at all. Customer service is not always available and sometimes cannot help at all.

The bottom line is that the use of pirate streaming portals tends to cause frustration in the long run. The price and variety of programs may sound tempting at first. The bottom line is, however, that a potential prospect must be aware that the services are not only illegal, but also by no means offer what the advertising may promise. Pay TV broadcasters such as Sky in particular are also taking active action against operators of illegal platforms, as an example from spring this year shows. This could also have legal consequences for the users of such offers.