Where is the memory of our immune system stored

Actually, previous contact with other coronaviruses should provide better immune protection against SARS-CoV-2 infection. But previous colds with coronaviruses apparently do not offer efficient immune protection against SARS-CoV-2. Rather, the memory cells of the immune system seem even more likely to contribute to a severe disease course of Covid-19, as a research team from Kiel shows. 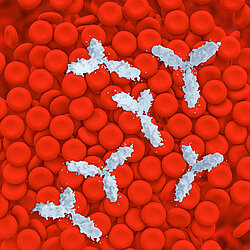 In the course of life comes the immune system immune system
The body's defense system consists of three functional circles:
(1) Bone marrow as a site for the formation of immune cells.
(2) Various central immune organs such as thymus (imprinting T lymphocytes) and lymphatic organs near the gut (for imprinting B lymphocytes).
(3) Secondary lymphatic organs such as the spleen, lymph nodes and tonsils (tonsils).
A distinction is made between the so-called humoral defense (via the body fluids containing antibodies and factors from the so-called complement system) and the cell-mediated defense (with B and T cells, macrophages, antigen-presenting cells, granulocytes, etc.).
of a person in contact with numerous foreign substances, such as pathogens. When it encounters a previously unknown pathogen, so-called naive T cells become T cells
T lymphocytes or T cells are mainly found in the lymph fluid and mature in the thymus (hence the T). Like B-lymphocytes, they take care of the immune system and are so-called "immunocompetent cells" because they have the ability to individually recognize and specifically combat those foreign substances (or their antigens) with which they come into contact .
activated, which after a learning phase of several days drive the immune reaction against the new pathogen. This “knowledge” of the immune system about the specific pathogen is stored in the body in the form of T memory cells after the acute immune reaction. If the immune system comes into contact with the same pathogen again, these memory cells are activated and can fight the pathogen faster and more effectively than naive cells. These memory cells can also react to similar pathogens, for example different strains of coronaviruses, in a so-called cross-reaction and also fight them more quickly.

However, COVID-19 can take very different courses - from symptom-free to life-threatening, especially in older people with more severe courses. The reasons for this are unclear.

Many people had contact with other coronaviruses before the appearance of the new type of coronavirus SARS-CoV-2, for example as a cause of colds. One hypothesis was therefore that these earlier contacts could also contribute to better immune protection against SARS-CoV-2 infection. Members of the Cluster of Excellence "Precision Medicine in Chronic Inflammation "(PMI) followed up from Kiel (see Immunity, online advance publication on November 19, 2020).

The research team around Professor Petra Bacher and Professor Alexander Scheffold from the Institute for Immunology at the Christian-Albrechts-Universität zu Kiel (CAU) and the University Medical Center Schleswig-Holstein (UKSH), Campus Kiel, with colleagues from the University Hospitals Cologne and Frankfurt were able to show that people who have not yet been infected with SARS-CoV-2 actually have certain immune cells, so-called T memory cells, which can also recognize SARS-CoV-2 as foreign bodies. However, these “pre-existing” memory T cells are apparently not particularly capable of recognizing a SARS-CoV-2 infection and fighting it, since they only bind the virus weakly. Instead, these memory cells could even contribute to a more severe course of the disease.

"Previous work had already shown that people who have not had any contact with the novel coronavirus SARS-CoV-2 still have T memory cells that can recognize SARS-CoV-2 as a pathogen. But it was not clear where these come from and, above all, what influence they have on the SARS-CoV-2 defense. One hypothesis was that they came from contact with common cold coronaviruses and cross-react against Sars-CoV-2. Our focus was therefore on these already existing memory cells. We wanted to investigate whether these really lead to better protection against SARS-CoV-2 infection, ”explains Prof. Alexander Scheffold, Director of the Institute for Immunology at CAU and UKSH, Campus Kiel, and member of the PMI Cluster of Excellence.

To do this, they examined the immune cells from the blood of donors who had not previously had any contact with SARS-CoV-2. They were able to show that people without previous contact with the virus actually have these memory cells that also recognize SARS-CoV-2 as a foreign body. “However, contrary to expectations, younger people who get more common colds do not have a higher number of these cells. In addition, only a small part of these cells also react with the CoronaCorona
-Cold viruses. The memory cells apparently have little to do with previous contact with corona cold viruses, ”reports Scheffold. "Rather, it seems to be the case that in the course of life the repertoire of memory cells against many different pathogens grows and thus the probability that there are some that recognize SARS-CoV-2 by chance. This memory cell repertoire, which increases with every infection, can therefore also be referred to as "immunological age", which actually increases with biological age, "continues Scheffold.

But although these memory cells are present in everyone, they are obviously not involved in the defense against SARS-CoV-2 infection. This is probably due to their quality: “These T memory cells recognize SARS-CoV-2 viruses, but they don't do it very well. As a result, they are probably not in a position to ensure that the virus is successfully fought, ”explains first author Prof. Petra Bacher, Schleswig-Holstein Excellence Chair, Junior Research Group Leader“ Intestinal Immune Regulation ”from the Institute for Immunology at the CAU. Because the research team actually found T cells in COVID-19 sufferers with a mild course, which recognize the virus very well. "This could be based on an immune reaction based on naive T cells, that is, the T cells that support the immune reaction against the virus here could have originated from naive T cells and not from memory cells," explains Bacher.

It was particularly interesting for the researchers that in patients with a severe course of the disease, the T cells recognize SARS-CoV-2 just as poorly as the “pre-existing” memory T cells. "This could indicate that these immune cells in the severe COVID cases are derived from the poorly binding pre-existing memory T cells," says Bacher. “This could provide a simple explanation as to why older people are at greater risk of developing the disease more seriously. In many cases, they are also of a higher immunological age and thus a higher probability that the immune system will fall back on these “incompetent” pre-existing memory cells, ”continues Bacher.

“Our work shows that previous colds with coronaviruses do not offer efficient immune protection against SARS-CoV-2. In addition, it provides important evidence that immunological age could possibly favor a severe course of COVID-19 disease. Further investigations are now necessary in order to check a direct connection between immunological age and severe COVID-19, and to analyze the influence of pre-existing memory cells on the immune reaction against SARS-CoV-2 in more detail, ”summarizes Scheffold.