How genetically similar were Negritos and Austronesians

Based on the current scientific consensus, they come from a prehistoric sea migration from Taiwan between 3000 and 1500 BC. BC, which as Austronesian expansion is known . Austronesians reached around 2200 BC. The Philippines, especially the Batanes Islands. They were the first people to invent ocean-going sailing technologies (notably catamarans, outrigger boats, lashed-lug boat building, and the crab claw sails) that activated their rapid spread into the islands of the Indo-Pacific. They assimilated the earlier Paleolithic Negrito, Orang Asli and the Australian-Melanesian Papuan populations on the islands in varying degrees of admixture. As a result, many of these populations share a common genetic element due to the Austronesian expansion. They also reached Australia, Rapa Nui (Easter Island), Japan, Madagascar, New Zealand and Hawaii furthest, possibly America as well.

In addition to language, the Austronesian peoples also share common cultural traits to varying degrees, including widespread traditions and technologies such as tattooing, stilt houses, jade carving, wetland farming, and various rock art motifs. They also share a common group of domesticated plants and animals that were carried along with the migrations, including rice, bananas, coconuts, breadfruits, Dioscorea Yams, taro, paper mulberries, chickens, pigs and dogs.

The linguistic links between Madagascar, Polynesia, and Southeast Asia were recognized by European authors early in the colonial era, particularly the remarkable similarities between Malagasy, Malay, and Polynesian numerals. The first official publications on these relationships were published in 1708 by the Dutch orientalist Adriaan Reland, who recognized a "common language" from Madagascar to western Polynesia. although the Dutch explorer Cornelis de Houtman also recognized the linguistic links between Madagascar and the Malay archipelago before Reland in 1603.

The Spanish philologist Lorenzo Hervás y Panduro later dedicated a large part of it Idea dell 'Universo (1778–1787) founded a language family that connects the Malaysian Peninsula, the Maldives, Madagascar, the Sunda Islands, Moluccas, the Philippines and the USA, the Pacific Islands eastwards to Easter Island. Several other authors confirmed this classification (with the exception of the incorrect inclusion of Maldivian) and the language family came as the "Malayo-Polynesian," first known by the coined German linguist Franz Bopp in 1841 (German: Malay-Polynesian ). The links between Southeast Asia, Madagascar and the Pacific Islands have also been established by other European researchers, including the orientalist William Marsden and the naturalist Johann Reinhold Forster.

Johann Friedrich Blumenbach added in the second edition of De Generis Humani Varietate Nativa (1781) Austronesians added as a fifth category to his "varieties" of humans. He first grouped them according to geography and therefore called the Austronesians the "people from the southern world". In the third edition, published in 1795, he named Austronesians the "Malay race" or the "brown race" after correspondence with Joseph Banks who was part of James Cook's first voyage. Blumenbach used the term "Malay" because of his belief that most Austronesians spoke the "Malay language" (ie the Austronesian languages), although he inadvertently caused his racial category to be confused with the Melayu people. The other cultivars that Blumenbach identified were the "Caucasians" (white), "Mongols" (yellow), "Ethiopians" (black) and "Americans" (red). Blumenbach's definition of the Malay race is largely identical to the modern distribution of the Austronesian peoples, including not only the Southeast Asian islanders but also the people of Madagascar and the Pacific Islands. Although Blumenbach's work was later used in scientific racism, Blumenbach was a monogenist and did not believe that the human "varieties" were inherently inferior to one another.

Malay variety. Tawny-colored; Hair black, soft, curly, thick and profuse; Head moderately narrowed; Forehead slightly swollen; Nose full, fairly broad, so to speak diffuse, thick at the end; Mouth large, upper jaw slightly protruding, with parts of the face sufficiently protruding and distinct when seen in profile. This last variety includes the islanders of the Pacific Ocean as well as the residents of the Mariannas, the Philippines, the Moluccas and Sunda Islands, and the Malay Peninsula. I want to call it the Malay because the majority of men of this variety, especially those who live in the Indian islands near the Malacca Peninsula, as well as the sandwich, society and friendly islanders and also the Malambi from Madagascar up to the residents of Easter Island, use the Malay language.

Until the 19th century, however, scientific racism favored the classification of the Austronesians as a subset of the "Mongolian" race as well as polygenism. The Australian-Melanesian population groups in Southeast Asia and Melanesia (whom Blumenbach originally classified as a "subrace" of the "Malay" breed) were now also classified as separate "Ethiopian" by authors such as Georges Cuvier, Conrad Malte-Brun ("Conrad Malte-Brun") Breed treats. who first coined the term "Oceania" like Océanique ), Julien-Joseph Virey and René lesson.

British naturalist James Cowles Prichard originally followed Blumenbach by treating Papuans and Aboriginal Australians as descendants of the same tribe as Austronesians. With its third edition of Researches in the Physical History of Man (1836-1847), however, due to the influence of polygenism, his work had become more racist. He classified the Austronesian peoples into two groups: the "Malayo Polynesians" (roughly equivalent to the Austronesian peoples) and the "Kelænonesians" (roughly equivalent to the Australo-Melanesians). He further subdivides the latter into the "Alfourous" (also "Haraforas" or "Alfoërs", the Australian natives) and the "Pelagian or Oceanic Negroes" (the Melanesians and West Polynesians). Even so, he admits that "Malayo Polynesians" and "Pelagian Negroes" had "remarkable characters in common", particularly in terms of language and craniometry.

In 1899 the Austrian linguist and ethnologist Wilhelm Schmidt coined the term "Austronesian" (German: austronesian , Latin oyster , "South wind"; Greek νῆσος , "Island") to refer to the language family. Schmidt had the same motivations as Codrington. He suggested the term as a replacement for "Malayo-Polynesian" because he also spoke out against the implicit exclusion of the languages ​​Melanesia and Micronesia in the latter name. It became the accepted name for the language family, keeping Oceanic and Malayo-Polynesian languages ​​as names for subgroups.

The term "Austronesian" or more precisely "Austronesian-speaking peoples" refers to the people who speak the languages ​​of the Austronesian language family. However, some authors disapprove of the use of the term to refer to humans, wondering whether there is indeed a biological or cultural common ancestry between all Austronesian-speaking groups. This is especially true for authors who reject the prevailing "Out of Taiwan" hypothesis and instead offer scenarios in which the Austronesian languages ​​spread to pre-existing static populations through lending or convergence with little or no population movements.

Since the 19th century there has been serious research into the Austronesian languages ​​and their speakers. Modern science of Austronesian dispersion models is generally attributed to two influential works in the late 20th century: The Colonization of the Pacific: A Genetic Pathway (Hill & Serjeantson, eds., 1989) and The Austronesian Expansion and Origin of Languages (Bellwood) 1991). The subject is of particular interest to scholars because of the remarkably unique characteristics of Austronesian speakers: scope, diversity, and rapid diffusion.

Regardless, there is still some disagreement among researchers regarding chronology, origin, distribution, adaptation to the island environment, interactions with pre-existing populations in areas where they have settled, and cultural developments over time. The generally accepted hypothesis is the "Out of Taiwan" model proposed by Peter Bellwood for the first time. However, there are several competing models that create a kind of "pseudo-competition" among their followers because they focus closely on data from limited geographic areas or disciplines. The most notable of these is the "Out of Sundaland" (or "Out of Island Southeast Asia") model. As a generalization, writers based in Indonesia and Malaysia tend to prefer the "Out of Sundaland" model, while writers based in Taiwan and the Pacific Islands tend to prefer the "Out of Taiwan" model.

Austronesians were the first to invent ocean sailing technologies that enabled them to colonize much of the Indo-Pacific region. Before the colonial era of the 16th century, the Austronesian language family was the most widely distributed language family in the world, stretching over half the planet from Easter Island in the eastern Pacific to Madagascar in the western Indian Ocean.

Today it is spoken by around 386 million people (4.9% of the world's population), making it the fifth largest language family in terms of the number of speakers. The main Austronesian languages ​​with the highest number of speakers are Malay (Indonesian and Malaysian), Javanese and Filipino (Tagalog). The family contains 1,257 languages, the second most common of all language families.

Historically, Austronesians live in a unique "island world". Austronesian regions are almost exclusively islands in the Pacific and Indian Ocean with predominantly tropical or subtropical climates with significant seasonal rainfall. They only penetrated the interiors of large islands or mainlands to a limited extent.

These include Taiwanese natives, the majority of the ethnic groups in Brunei, East Timor, Indonesia, Madagascar, Malaysia, Micronesia, the Philippines, and Polynesia. Also included are the Malaysians of Singapore; the Polynesians of New Zealand, Hawaii, and Chile; the Torres Strait Islanders of Australia; the non-Papuan peoples of Melanesia and coastal New Guinea; the Shibushi speakers from Comoros; and the Malagasy and Shibushi speakers from Réunion. They are also found in the regions of southern Thailand, in the Cham areas in Vietnam and Cambodia, and in parts of Myanmar.

Some authors also suggest further settlements and contacts in the past in areas that are not now inhabited by Austronesian-speaking people. These range from probable hypotheses to very controversial claims with minimal evidence. In 2009, Roger Blench created an expanded map of Austronesia that includes these claims based on various evidence such as historical reports, loanwords, introduced plants and animals, genetics, archaeological sites, and material culture. These include areas such as the Pacific coast of the Americas, Japan, the Yaeyama Islands, the Australian coast, Sri Lanka and coastal South Asia, the Persian Gulf, some of the Indian Ocean islands, East Africa, South Africa and West Africa. 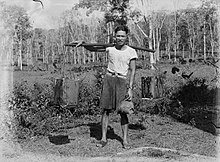 Samoan with two containers over his shoulder

The following groupings belong to the Austronesian peoples by name and geographical location (incomplete):

The broad consensus on Austronesian origins is the "two-tier model," where an original Paleolithic native population in the island of Southeast Asia were assimilated to varying degrees from incoming migrations from Neolithic Austronesian-speaking peoples from Taiwan and southern China of around 4,000 BP. Austronesians also mingled with other pre-existing populations, as well as later migrant populations among the islands they colonized, leading to further genetic inputs. Most notable are the Austrian-speaking peoples on the West Island of Southeast Asia (Peninsula Malaysia, Sumatra and Java); the Bantu peoples of Madagascar and the Comoros; as well as Japanese, Indian, Arab and Han Chinese traders and migrants over the past few centuries.

The Southeast Asian island was settled in the Paleolithic by modern people following coastal hiking trails that probably date back to 70,000 BC. Began long before the development of Austronesian cultures. These populations are characterized by dark skin, curly hair, and short stature, which leads Europeans to believe that they were related to African pygmies in the scientific racism of the 19th century. Despite these physical differences, genetic studies have shown that they are more closely related to other Eurasian populations than they are to Africans.