Why is Allah the first god

The one, indivisible God of the Muslims

“Allah” is the name of God in Islam. In the strictly conceived Muslim monotheism, Allah is a single God who, in contrast to the Christian Trinity, is indivisible. The principle of the absolute unity of Allah is called "Tawheed". This central element of faith is formulated particularly clearly in the Koran in sura 112, “al-Ichlas” (faith without reservation): “1 Say: He is God, one and only, 2 God, through and through (...) 3 He has neither begotten nor was he begotten 4 And none is his equal ”, (transl. n. Paret). Along with Sura 1, the opening sura (“al-Fatiha”), this sura is one of the most frequently quoted suras in prayers. 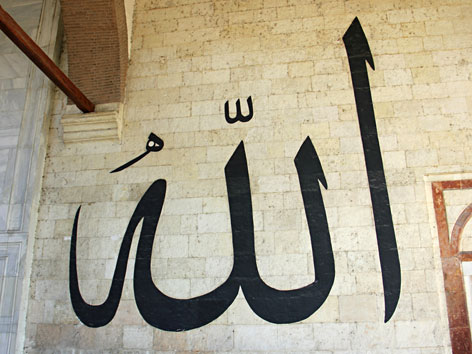 Representations of God are forbidden in Islam, so calligraphy is all the more popular. Here the lettering "Allah" on a house wall.

Muslims also profess the unity of Allah in their five daily compulsory prayers (“Salat”) and of course in their creed, the “Shahada”). In Islam, with reference to Sura 29:46, the rule is: “Our and your God is one. We are devoted to him ”suggests that Jews and Christians also worship Allah as members of the book religions (“ Ahl al-Kitab ”). On the other hand, there are divided opinions among Christians. Since the Second Vatican Council, Catholics have recognized that Muslims also worship the “only God”.

"Allahu akbar" - God is the greatest

Muslims, like Christians and Jews, believe in a creator God: Allah created the world, but is not part of it, but stands above it. He spoke to the people through his prophets. Mohammed is considered the last prophet to whom the final book of revelation, the Koran, was revealed. But Islam also recognizes most of the Jewish and Christian prophets. Jesus is also considered a prophet.

The God of Muslims has no gender, is omnipotent, omniscient and omnipresent. This image of God is also expressed in the formula “Allahu akbar”, God is so great (like no one else). There can therefore be no second god and no divine power of equal value.

Further properties of the Islamic God can be found in the "99 Names of Allah", a selection of the attributes that the Koran ascribes to Allah. The first two names of Allah are quoted several times a day with the "Basmala" - "bi-smi llahi r-rahmani r-rahim" (In the name of the merciful and gracious God, trans. N. Paret). The 100th name of God is unknown to man and inexpressible. However, the “99 names of Allah” are often quoted, for which many Muslims use the “Misbaha”, a prayer chain with 99 or 33 stones. From some of the names of God, together with the word "Abd" (servant), Muslim first names are formed, for example Abdallah, Abd al-Karim and Abd al-Hamid.

The word “Allah” is most likely derived from the Arabic term “ilaha” (deity) and the particular article “al” placed in front of it: “al-ilaha” - the deity. Already in pre-Islamic times ("Jahiliyya") there was a high god in the polytheistic pantheon by the name of Allah, whose statues were worshiped. With Islam, not only unconditional monotheism prevailed, but also the strict prohibition to form an image of Allah - or one of his prophets. On the other hand, artistic calligraphy with the words "Allah" is widespread.