Which is better Dharamshala or Mcleod Ganj

Dharamsala or McLeod Ganj - love for the earth

Here you can see a specialty of the Indian postal system: 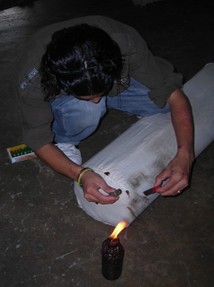 All packages, here a carpet, must be sewn in white cloth and sealed. Then
it is carried to the post office, which operates a tailor and pennant seller in McLeod Granj at the same time: 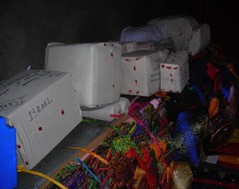 So all these white parcels are waiting to be transported - and sewing is still mandatory, at least in the northern provinces!


My partner, who is used to clear "economic structures", was amazed when he found out firsthand what day-to-day business it is to hand in a 20 kg package in Leh at the post office !: Taxi to the main post office at the airport - and please turn around Package has to go to the tailor. So back to the market, because at the lower post office no tailor had a suitably large cloth. In Leh in the market - all tailors initially refuse, the part is too big. The last one in the street has pity, as we drag the 20 kg for half a kilometer. Hours later the post office at the market - only accepts parcels up to 10 kg. So taxi back to the main post office. Now we are honored at least one look and - only now - the package comes on the scales: but it is 20.5 kg! And now…? In a bad mood we would have to do the whole tour again, because you can't just take something out of a sewn up package. Thank the Lord for little graces - it was sent like this!


The spirituality as represented by the Dalai Lama makes the place a major attraction. Buddhist connoisseurs say, however, that if you are looking for spiritual training, it is better to do so in Kathmandu or Leh, the atmosphere here is too political. Indeed, the mixture of spirituality, Western money, many searching tourists and the longing for Buddhist love is blooming. Quite a few monks here do not live as monks, but neither do they take off their robes because - according to experience - they then become more attractive for foreign tourists. That is also openly admitted. It is not uncommon for even a high-ranking monk and teacher to marry one of his blonde pupils. In 2005 there were allegedly more than 40 weddings between exiled Tibetans and foreigners. The reverse variant seems much rarer. Even normal Indians are nowhere near as attractive.

Another popular sport among the local young people is "To learn English". For this purpose, you are looking for sponsors who will finance it for one or more years. Some can boast of having landed several sponsors for it and are enjoying the consequence of life. Men (here an American) are also asked for tutoring, sometimes it actually seems to be for the sake of English. Otherwise, learning English looks like this, day after day: 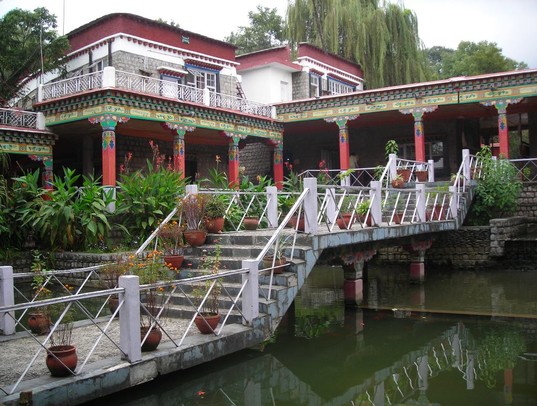 The Norbulinka Institute was founded in order to be able to continue cultivating Tibetan arts, handicrafts and Tibetan traditions in exile. It is particularly important for young Tibetans to experience that their culture also creates artistic values ​​that are in demand internationally - and can secure their own existence. A temple, a museum, a noble, Tibetan-style hotel and a number of schools are located on the beautifully landscaped and well-tended grounds.


So you can Learn thanka painting, furniture painting and furniture production are cultivated, fashion is tailored, from traditional aprons to modern bed linen - wonderful unique items are produced here. In addition, around 150 people live here - most of them are teachers and artists.