Sunflowers are more than a feast for the eyes 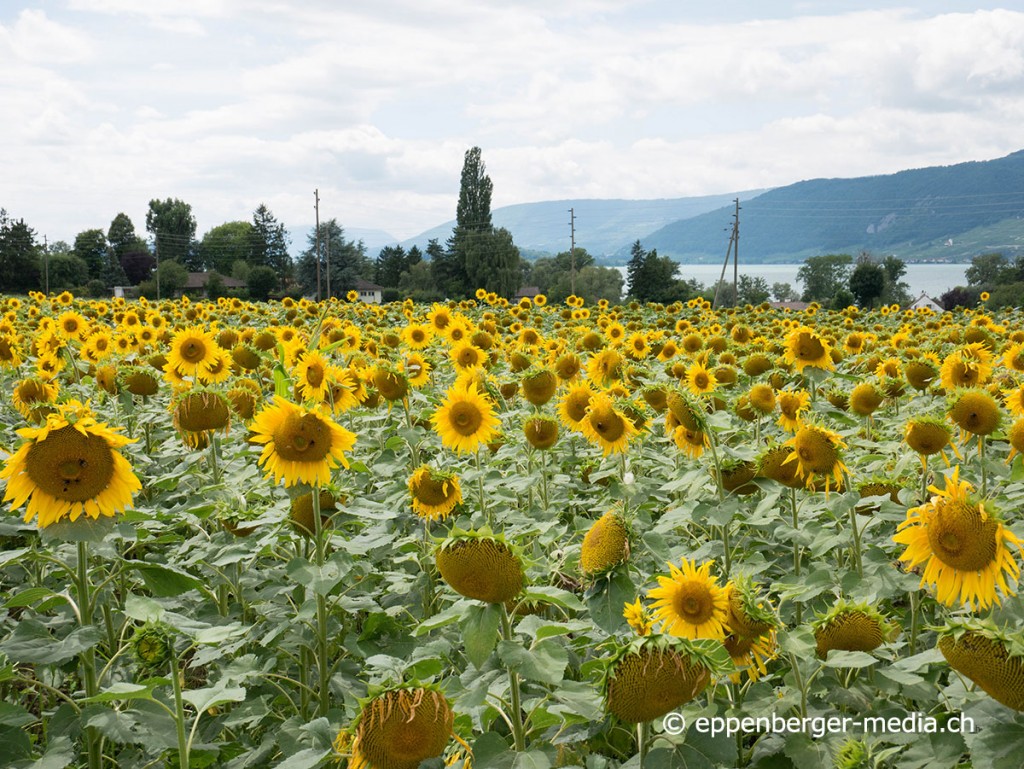 The oil mills could use more Swiss sunflower seeds. But growing sunflowers is not without risk. In climatically good years, however, earnings are good.

No vegetable oil is used more often in Switzerland than sunflower oil: Last year the share was 34 percent, followed by rapeseed oil, which is on the rise, which reached 26 percent. The latter will continue to grow in the next few years, as in future Zweifel French Fries Chips will only deep-fry its chips in Swiss rapeseed oil - instead of sunflower oil from abroad. Why doesn't the traditional company use Swiss sunflower oil? Rapeseed oil has gained significantly in popularity in Switzerland in recent years and has been assessed very positively in surveys with regard to health and taste, the company said on request. In addition, the demand can be completely covered by Swiss production. There is simply not enough Swiss sunflower oil, although the area under cultivation has grown significantly in the last five years. This year it is around 5000 hectares, which is almost two percent of the total open arable land in Switzerland. The demand for local sunflower seeds has exceeded the supply for years. For the 2018 harvest, the purchase quantity of 18,000 tonnes advertised by the Swiss Grain Producers Association (SGPV) and specified by the industry has not yet been achieved and will probably not be exhausted. "That's why interested farmers can register directly at www.agrosolution.ch even after the official registration deadline has passed, as long as the total amount has not yet been reached," says Andrea Koch from SGPV.

What are the advantages of growing sunflowers?

From an agronomic point of view, the frost-tolerant sunflower is an undemanding culture. The main problems arise after sowing at the end of March or beginning of April, when the small plants have to assert themselves against the weeds in spring and then snails and aphids attack them. Applying herbicides beforehand helps against the weeds, and if the aphid infestation is too strong, the use of an insecticide is recommended. If the damage threshold is exceeded in snails, the use of snail pellets is called for. The weeds can also be fought mechanically with a hoe. After all, the sunflower is one of the traditional root crops that have always been chopped and loosened when sowing and during the growth phase. The sunflower is therefore also a welcome loosening up in grain-intensive crop rotations with winter seeds, with a considerable proportion of organic material that is worked into the soil after the harvest. A break from cultivation of four to five years is recommended. This helps to prevent diseases such as sclerotinia, which can be a problem with sunflowers. It is therefore not very compatible with rapeseed. There are farmers who, as a preventive measure against fungal diseases, consciously set the row spacing to 75 cm instead of the usual 50 cm or 40 cm, in order to bring more light and wind into the rows against the moisture. "The harvest losses in the event of a fungus infestation can be massive," says Viktor Dubsky from the Arenenberg Education and Advice Center. When it comes to fertilizers, the arable farming adviser recommends rather low nitrogen applications of between 20 and 30 kg per hectare for sowing. Too much nitrogen delays ripening, increases susceptibility to disease and reduces stability. In addition, depending on the availability in the soil, doses of phosphorus, potash and magnesium are necessary. Sunflowers get by with little water; irrigation is usually not necessary. However, they are sensitive to long dry phases. When growing sunflowers, many farmers rely on the services of contractors who take over the sowing and harvesting with special equipment and also provide advice on choosing a variety, for example. 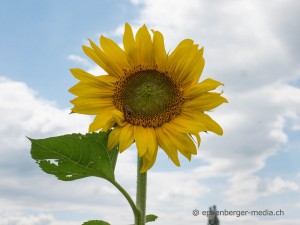 The location plays an important role when choosing the variety: Sunflowers thrive better in lower altitudes of less than 500 meters above sea level and with many days of sunshine. Basically, the farmer has to choose between a classic and a HO variety, which are on a list provided by the industry. HO stands for High Oleic. Due to its special fatty acid pattern, this oil can be heated particularly well and is therefore used in deep fryers, for example. It is best for the farmer to find out at his collection point whether it accepts HO or traditional varieties. Not all of them accept both. Characteristics such as yield and disease resistance are also in the foreground as selection criteria. Among the classic varieties, the early “Sanluca” is popular. "Although it does not have as much yield as other varieties, it reaches the water content of less than 8 percent aimed for in threshing relatively early," says Viktor Dubsky. Otherwise, other varieties could result in better yields but also high drying costs, which in turn reduce earnings.

Crop fluctuations as a weak point

Even if the optimal variety has been found, the yields can vary greatly from year to year due to external circumstances. And this is probably the greatest weakness of the culture: fluctuations between 12 and 40 dt per hectare are not uncommon. In order to achieve the same contribution margin as with a 70 dt class I wheat, the traditional sunflower varieties require 34 dt, in Extenso cultivation 27 dt and with the HO varieties 31 dt per hectare. This is shown by profitability calculations by the Wallierhof Agricultural Center in the canton of Solothurn. In ideal years with a lot of sun and little fog, these yields are achieved well and often even significantly exceeded. But not in other years, even a hailstorm can ruin the dream of a good yield in minutes. In addition, many farmers fear the risks of soil damage when harvesting and reseeding in October has to be carried out on wet soils.

The fact that the acreage for sunflowers in Switzerland has increased in recent years despite all the disadvantages mentioned is also due to the direct payments. In addition to the individual crop contribution of 700 francs per hectare, there is currently a supply security contribution of 900 francs. In the case of individual crop contributions, the law means that the crop must always be harvested, regardless of how low the yield is. Around 80 percent of the acreage is also grown under the Extenso program, i.e. without the use of fungicides and insecticides. There is an additional 400 francs for this. And in many cantons the sunflower is part of LBQ programs, for example for a particularly diverse crop rotation. Resource efficiency contributions could possibly become an issue: In tests carried out at the Strickhof, Persian clover was successfully tested as an undersown in sunflowers as a ground cover to protect against erosion. 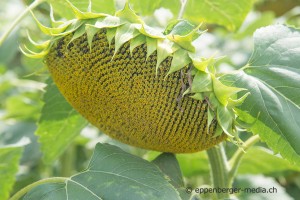 According to the industry organization swiss granum, the purchase prices for the current harvest are on average 78 francs per dt for conventional sunflowers and 80.75 francs for HO sunflowers. They are slightly below the prices of the previous year due to lower oil prices for all oil seeds on the world markets, as swiss granum writes in a press release. The price includes a support contribution to the oilseed pool of CHF 10 for conventional and CHF 8 for HO sunflowers. The pool is fed by a levy of 1 franc per dt for all oilseeds, including rapeseed. There are also niche markets such as the cultivation of ornamental flowers or potted sunflowers for the production of pure sunflower seeds.

The low yield stability of the sunflower discourages many farmers from cultivation, especially in the areas over 550 meters above sea level, because the risk of loss is too high for them. This is why the targeted amount of Swiss sunflowers will probably not be achieved in the next few years either. There remains a good argument, but one that is above all of ideal value: the sunflowers with their yellow flower heads ensure blooming landscapes and some “ohh” in the population and thus make an active contribution to the image cultivation of Swiss agriculture. Additional money is only available for this within the framework of the landscape quality contributions. 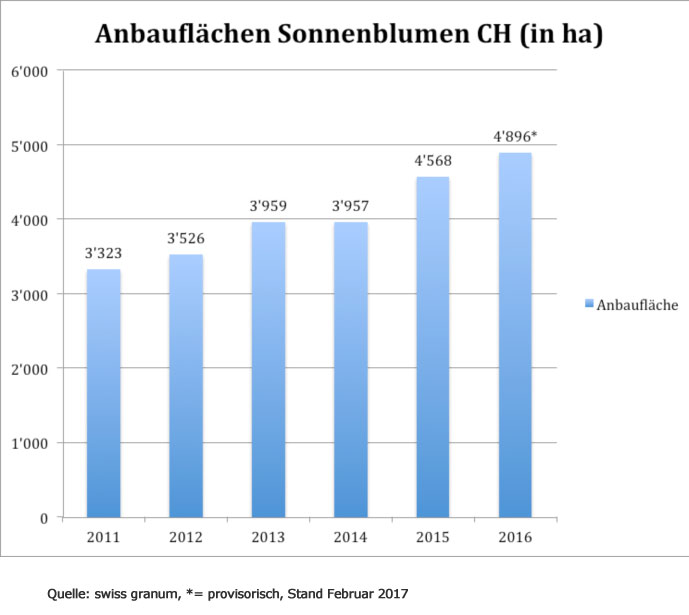 The acreage for sunflowers according to the guidelines of organic cultivation amounted to around 280 hectares in 2015, which corresponded to a share of slightly more than 6 percent of the total cultivation area. In principle, the same site conditions apply as for conventional cultivation. The variety selection is limited, however, because the seeds of most varieties are dressed, which is not allowed to be used in organic farming. According to Biofarm, the demand from Coop and Migros has largely been met for the oil made from the traditional varieties. The market for HO rape in organic quality is still very small and therefore insignificant up to now. There is still a small market for organic peeled sunflowers, which have been grown for a few years now, especially in western Switzerland.

The sunflower (Helianthus annuus) was introduced to Europe by Spanish sailors from North America, where it was first used as an ornamental plant. It has only been used as an oil plant since the 19th century. High oleic sunflower varieties (HO sunflowers) were specially bred for the use of heated oils. With their special fatty acid pattern, they are better suited for this than the traditional sunflower oils.