Every function has a rule

Functions can be divided based on various properties. Important properties that are of importance are briefly summarized in the following section. [1]

The amount of possible values ​​that the output variable ("variable")

can assume is called a definition set

. The amount of values ​​that make up the function is called accordingly

as results, as a set of values

Sometimes individual values ​​or intervals have to be excluded from the definition set in order to ensure that the function always behaves clearly.

In the following, only “real-valued” functions are examined, that is, rules that define the real values ​​of an (independent) variable

also real values ​​of the (from

to assign. Unless there are further restrictions, this applies here

In general, functions can be represented in three different ways:

are present, which is often the case, especially with empirically determined (measurement) data. With a large number of value pairs, however, tabular displays can quickly become confusing - without the use of computers. A second disadvantage is that missing function values ​​between two value pairs can only be estimated by averaging ("interpolation").

Representation of a functional relationship using a table of values.

In the case of graphic representations, the individual value pairs

mapped in a unique way to points of a coordinate system. [3] If the distances between the value pairs are only very small, the functional relationship can be graphically illustrated by a curve. This often enables the function values ​​to be read off quickly (at least approximately). In this way, for example, the course of an electrical voltage signal over time can be observed directly on oscilloscopes or cardiograms. [4] 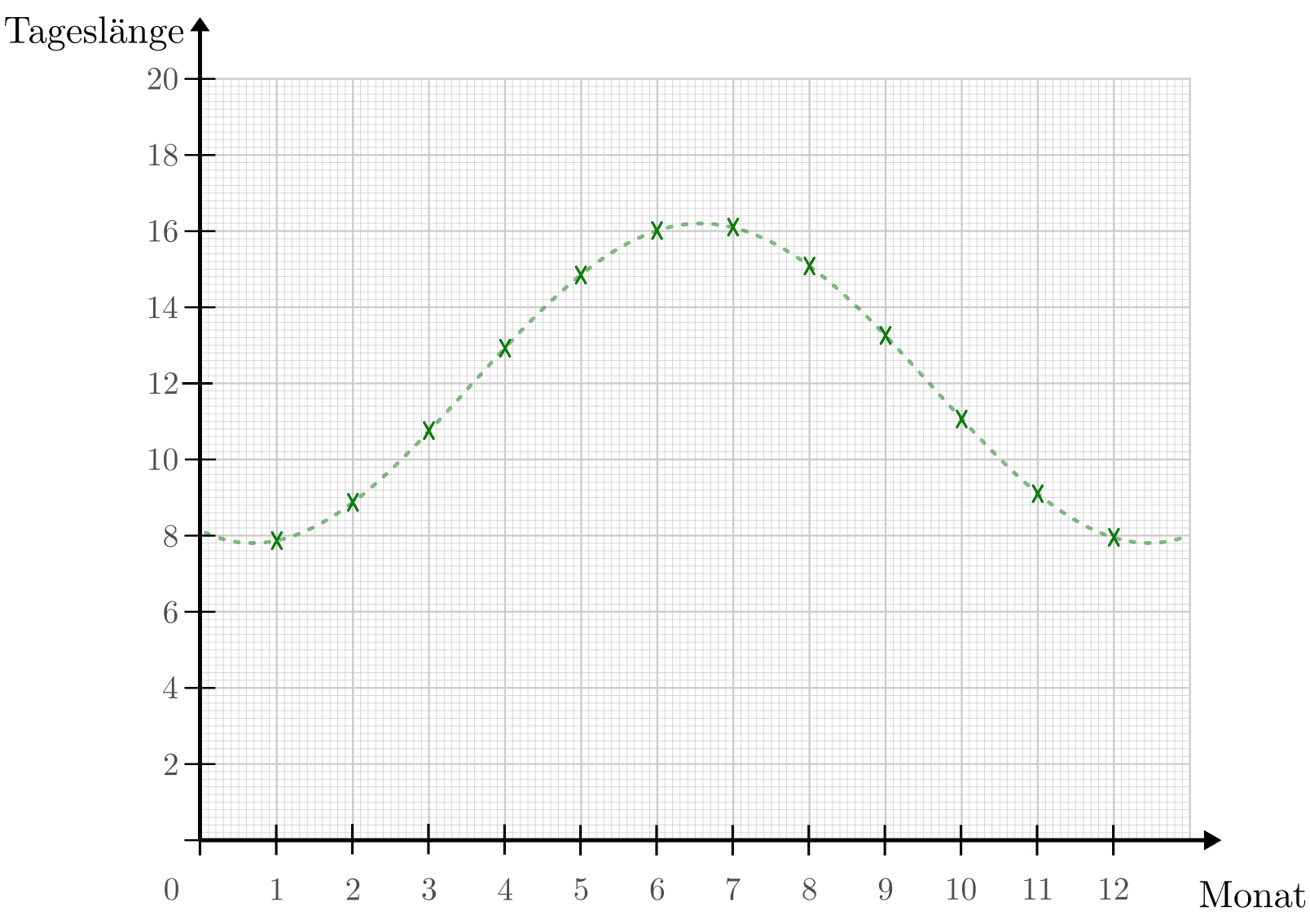 Representation of value pairs by means of a diagram (example: day length over the course of the year at the 50th degree of latitude).

How the picture of a function looks in a graphic representation also depends on the choice of the coordinate system, in particular on the scaling of the axes. For example, the

For the computational investigation of a function, the “analytical” form, ie a representation as a function equation, is preferred. A function equation can in turn be converted into a table of values ​​or a graphic form at any time, if required. A distinction is made between two types of functional equations:

Not every function can be turned into a post

resolved form are represented, for example

. As far as possible, the explicit form of representation is generally used

The distinction between surjective, injective and bijective functions enables an important classification of functions.

A function is a mathematical description of what "cause"

a certain effect within a process

evokes. Such a relationship only makes sense if the assignment of any value of the output variable

to a result value

is always unambiguous, a

- So it's not worth two different ones

Values ​​as a result.

Conversely, however, it is possible that different

- Deliver value as a result.

In general, functions are therefore not “reversible”, so it is not possible to find an assignment for every function that any one

Value in a unique way

Value assigns. A function has this property if and only if it is bijective. If a function is not bijective, it must first be made a bijective function by restricting its set of definitions or values.

Determination of the inverse function

is found by looking at the original functional equation

resolves and then the variables

In the same coordinate system will be a function

and their inverse function

Axis (argument and function values) can be exchanged. Should the names of the

-Axis, on the other hand, remain, the graphs of a function and its inverse function are always axisymmetric to the bisector of the first and third quadrant.

The investigation of a function for monotony, limitation, limit values ​​and continuity makes it possible in the field of analysis to make more far-reaching statements about the function, for example the appearance of the function graph.

In the same way as with sequences of numbers, monotony is an important characteristic of a function in functions.

Applies to all elements

from the domain of a function, too

applies. In the case of a constant function, the function values ​​are

It therefore applies to every function

or instead of the greater than or equal to relation

the greater than ratio

, that's what the function is called strict monotonously decreasing or increasing. Every strictly monotonically increasing function is bijective and thus reversible; the inverse function has the same monotony as the original function.

is called bounded if there are two real numbers

there so that all function values

lie between the two limiting numbers, so if:

as the lower bound and

referred to as the upper bound of the function.

A function can also only have a lower or an upper limit on one side in a certain area. For example, applies to all values ​​of the function

so that any number

represents an upper bound of the function. However, it is not possible to define a lower limit for the same function, since it assumes infinitely large values ​​in the negative range.

If a function has neither an upper nor a lower limit in a certain area, the function in this area is called unlimited.

-Values ​​approximate a certain numerical value. A function has such a limit if and only if it is monotonic and restricted.

Limits of functions are also defined in a very similar way to limits of sequences. However, while the “domain of definition” of sequences is limited to the natural numbers and thus only a Limit for

-Values ​​of functions in the positive as well as in the negative number range become infinitely large; it can therefore be a limit value for both

as well as for

A limit of a function for

exists precisely when there is ever greater

approach. This is the case if and only for everyone

Values ​​from a certain number

the convergence criterion is met, i.e. the difference between

becomes arbitrarily small. For every value, no matter how small

Environment) around the limit value

Value must lie within this environment. [8]

Is there a limit value

a function for any size negative or positive

-Values, this is how you write:

Exists for a function

one of the two limit values ​​above, then the function is called “convergent” for

. It is also possible that a function has no limit value for

owns; in this case it is called divergent.

The function values ​​become a diverging function with increasing

-Values ​​infinitely large, that's how they are called

as the upper bound, as it actually has to exist for a limit value.

Values ​​are considered; it is also possible to check whether a limit value exists if the

approach. Does such a limit exist

defined, its limit value at this point is equal to its function value, so it applies

. The above limit can, however, also exist if the function is in place

is not defined. Especially at the limits of the domain of definition

For this reason, functions are often examined for possible limit values ​​(for example at definition gaps).

If possible, approach the

Values ​​of the body

both from the left and from the right; one examines the behavior of the function at the points

is as small a number as possible. So the following limit values ​​are formed:

There are the following calculation rules for calculating with limit values:

When dividing two functions or limit values, care must be taken not to divide by zero, so it has to be

be valid. Is in particular

a function with the limit value

and are the limit values

the smallest and largest function are identical, this also applies to the limit value of the "average" function.

One describes a function in one place

and the function value

to match. A function is called (globally) continuous if the continuity condition for all

-Values ​​of the definition range is fulfilled.

Clearly, continuity means that the graph of a function does not make any “jumps”, ie it can be drawn along the definition range as a solid line (without removing the pen). This is the case with a large number of functions, for example with all completely rational functions, the sine or cosine function. Also the tangent and hyperbolic function

are continuous, as their function values ​​only change abruptly at the undefined points (definition gaps). The combination of two or more continuous functions using the basic arithmetic operations of addition, subtraction, multiplication or division other than zero results in a continuous function.

A clear example of a locally but not globally continuous function is the so-called signum function (also called the sign function). It is defined in sections as follows:

The Signum function is in all places except for

(locally) continuously. At this point, however, your left-hand limit value is correct

and its right-hand limit

continuous in an interval, it is also limited there. So there is a lower bound

and an upper bound

Values ​​of the interval applies.

in a closed interval

is taken as the minimum, the value

as the maximum of the function

One in a closed interval

also takes every value between

at least once. This fact, which is particularly important for the numerical calculation of zeros, is called the "interim value theorem".

As a zero becomes an output value

of a function, for which the associated function value

dissolves. Depending on the type of function, it is possible that it has several, one or no zeros.

If a function is drawn in as a graph in a coordinate system, zeros represent points of intersection or contact with the

so one can check for which one

-Values ​​from the common domain

the values ​​of the functions match for which output values

applies. Solving this equation is formally consistent with determining the zero of

If one or more intersection points exist, the function values ​​of

usually not zero. You get the associated

-Values ​​in one of the two functions.

Linking and chaining of functions¶

Further functions can be put together from the elementary functions, which are described in more detail in the next sections. This can be done in two ways:

When chaining two functions, the order in which they are chained must be observed: For example, is