What comes after gunpowder 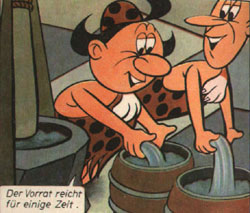 Gunpowder is a dangerous good produced and often used in MOSAIK on various occasions.

"Gunpowder" is usually colloquially referred to as "black powder". Black powder consists of 75 percent saltpeter (potassium nitrate), 15 percent carbon (mostly from charcoal) and 10 percent sulfur. The mixture must be relatively precise and the ingredients must be finely ground and carefully mixed. The mixture results in a highly flammable explosive with a strong explosive effect. There are also more modern gunpowder, which are composed differently, but such are not used under this name in the mosaic (example: gun cotton).

The assumption that the name "black powder" comes from its inventor, the monk Berthold Schwarz, is a legend. The name is much more due to the black color of the powder. The invention probably originated from the Chinese and is documented for the 13th century at the latest. Gunpowder came to Europe via the Arabs, where it was used from the 14th century. Gunpowder or black powder was the only explosive available for many centuries. However, it was primarily used as a propellant charge for all handguns and large firearms, making it an important military asset.

[Edit] Gunpowder at the Digedags

[Edit] In the South Seas

When exploring a large stalactite cave on the South Sea island, where the Digedags are stranded, they discover that the most important ingredient for making gunpowder is located there: saltpeter stones. Together with the sulfur from the island volcano's lava and charcoal, they have all the ingredients together and decide to make a larger supply. But the first time they try to mix the raw materials by hand in a mortar, a huge explosion occurs, which they only survive by luck. After that, they become more cautious and build themselves a cable-powered powder mill that they can operate from a safe distance. The result is a very fine gunpowder that works extremely well.

[Edit] In the age of inventors

The inventor Christian Huygens invented a gunpowder powered pump machine in 1678. However, according to the legitimate opinion of Digedags, it still has many disadvantages; the deafening noise and the dangerousness of the explosive charges make their use very unattractive. King Louis XIV is also anything but enthusiastic about a demonstration.

Denis Papin builds a model of a paddle wheel ship powered by a powder machine. When he wants to demonstrate the model Dig and Dag, the gunpowder keg standing next to it explodes due to Papin's inattention. The detonation is wrongly equated with the impact of Halley's Coment and thus also with the end of the world.

In order to win the trust of the rebellious Indians in Peru, Dig distracts the two guards of a powder magazine. Meanwhile, Dag fetches a powder keg from the depot, but it slips out of his hands and rolls in the direction of a camp of Spanish soldiers. There it explodes in the middle of the parked weapons and drives the Spaniards to flee. 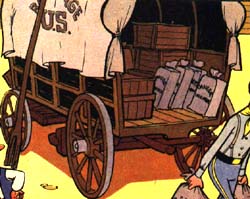 Explosive cargo is being unloaded

During their involuntary stay in the Fort on the Bear River, the Digedags come up with an escape plan. They take the opportunity to be transported into the ammunition chamber as a load of powder sacks. While Dig and Dag distract their guard, Digedag scratches a sack of powder that a soldier carries from the powder wagon to the ammunition chamber. He ignites the resulting powder trail with a sulfur wood and thereby blows up the entire arsenal. The Digedags flee on runaway horses through the breach in the palisade wall.

The following year, the villain Coffins and his gang are stuck on the island town and have to watch helplessly as the Digedags recover a large treasure trove of gold from the lake. The trapper Abe Gunstick appears with a barrel of gunpowder. Coffins snatches the powder from Gunstick and wants to blow the gold out of the mine. However, he did not take into account that the ceiling is too thin so that it would be destroyed by the blast. He finds his deserved end in the falling water.

[Edit] Gunpowder among the Abrafaxes

To get across a mountain river, Califax blows up the trunk of a conifer that stands close to the bank. He uses four capsules from the powder supply of Abrax's musket.

The Turks want to blow up the Capitano's castle. The pasha plans to build a tunnel under the fort. The Abrafaxe gave him the tip, however, to pile the explosive charge in the sound dome under the consultation room. The pasha's slaves, who can stop mining for the time being, have the greatest benefit from this. To do this, they "only" have to carry powder kegs; the sound dome is stuffed to the ceiling with powder kegs. The work is extremely dangerous, so you only work with closed lanterns. The project succeeds and the - unoccupied - fort is blown up with a huge explosion. 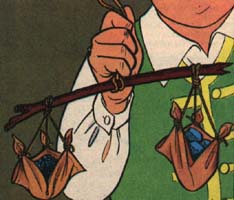 The manufacture of gunpowder requires extreme care when weighing the ingredients

Califax and Hans Wurst are imprisoned in the Munkacz fortress. In order to cause a revolt of the prisoners, the clever Hansl declares the simple-minded guard Ignaz to be seriously ill. He believes that without further ado and is ready to procure all the necessary ingredients for an alleged remedy - even if it should contain sulfur, saltpeter and charcoal in addition to pepper and salt. Ignaz doesn't seem to know that the ingredients can be used to make gunpowder. Hansl and the other prisoners use them to make cartridges (see picture), which they use to blow up the bars of their dungeon. This ultimately leads to the successful prisoner revolt and the loss of the fortress to the Kuruzen.

[Edit] In the Mediterranean

The Abrafaxe land on the legendary pirate island in the Mediterranean. In order to get rid of the pirates and, by the way, the villain Don Ferrando, Brabax devises a plan to use a stolen barrel of gunpowder to blow up the volcanic cone filled with rainwater. The water masses flowing into the volcanic interior would evaporate and blow up the island. After placing their explosive charge, the Abrafaxe flee by boat. Before the pirates can sink the Abrafaxe, a huge explosion tears apart the island and the pirate fortress.

[Edit] In the German Middle Ages

Count Hetzel and the bomb

Count Hetzel takes the book with the seven seals to become "the most powerful man in the world". After a thorough study of the book, he finds a recipe for a "magic powder" which makes him believe that with its help he will become unbeatable. He makes a small amount of it in his laboratory on the Ränkeburg. When the Abrafaxe and Count Schrottfried appear in front of his castle, Hetzel throws a small homemade bomb at them as a foretaste. This only causes no major damage because the powder mixture was not yet exact. With the second bomb, Hetzel wants to eliminate this error. Fortunately for the Abrafaxe, however, the burning Kienspan, which was supposed to serve as a detonator, goes out, and the second bomb does no damage either. There is no further use. Hetzel's factotum Anselmus drops a burning chip on the already made black powder, causing the castle keep of the Ränkeburg, where the laboratory is housed, to explode and Hetzel and Anselmus to be hurled in a high arc into a forest lake.

Later, the Abrafaxe used the gunpowder made by Hetzel to start a flying machine designed by Brabax.

[Edit] In the second Japan series

The junk loaded with gunpowderRed Dragon officially only carries salt. Califax enters the hold with a candle in search of salt, accidentally causing an explosion and the sinking of the ship.

[Edit] In the Abrafaxe Roman series

The Abrafaxe should appear in the Circus des Spontifex with a bang and appear out of nowhere. Brabax gets charcoal from a blacksmith in Mogontiacum and sulfur from a fruit dealer. He has to scrape the saltpetre off the walls of dried-out latrines, which then makes it noticeable due to its bad smell. He mixes the ingredients himself and fills them into an amphora. This is closed and provided with a fuse.

But their appearance in the theater of Mogontiacum fails because they jump on stage too early (or: the fuse is too long). The explosion is so strong that a large hole is torn in the stage wall. The audience flees in horror and the circus people are expelled from the city.

The invention of black powder is portrayed in the 2007 Abrafaxe calendar. The calendar sheet from April 2007 shows the three Abrafaxe and the monk Berthold Schwarz after the first successful black powder explosion in the laboratory. Black and Brabax look quite black, while Abrax extinguishes the smoking Califax. The invention is briefly described on the back of the calendar without, however, referring to the legendary nature of this version of the story.

In the short story "Back then in the Sherwood Forest", Robin Hood carried a bag of gunpowder with him in 1209, which he allegedly received from his cousin Marc O'Polo in China. However, he has not yet shown himself to be particularly proficient in handling the dangerous substance.

In the fan comic Runkel according to Dräger & Hegen: Under the Sign of the Turnip (Part 3), due to an experiment with sulfur, saltpeter and charcoal, Charlatanius blows up part of Rübenstein Castle, whereupon he and Heino are allowed to leave the battered walls for safety reasons for educational purposes.

In the fan comic Nicodemus on a long journey the smart fox sabotages the Kiebitzer bicycle race. However, he attaches the gunpowder to the bike with start number 1, which is his own.

[Edit] Gunpowder campaign against the MOSAIC

In 1957, children and young people from Wasungen in Thuringia were apparently inspired by the Digedags and mixed gunpowder themselves. Three of them suffered serious injuries from the subsequent explosion. This became the occasion for some newspaper articles hostile to MOSAIK:

The following is quoted from the article by Theodor Werner (taken from Fanzine Digefax 1).

In 2012, the FZS dedicated a small part of its exhibition to Dig, Dag, Digedag. GDR comic MOSAIK this fact. They even laid out a corresponding accident log for this purpose.

[Edit] Gunpowder is used prominently in the following mosaic publications

Note: The information relates to booklets in which the powder is not only used as a propellant charge for weapons, but also in which manufacture and special uses play a role.