Honda launched the eleventh generation of the Civic and presented the compact to its US customers first. In the case of compact cars, too, the main focus of the Japanese seems to have shifted to the American market. After the Japanese showed a prototype of the new sedan in November 2020, they are now pushing the production model. There are practically no differences. 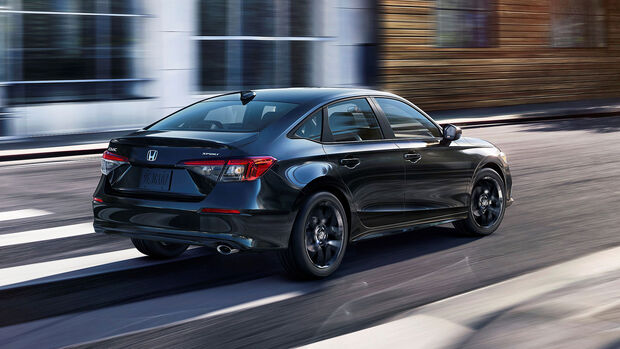 Honda
The shoulder line of the new model is lower than that of the predecessor and the exterior mirrors have moved down onto the door sill.

Honda has completely revised the design of the Civic: It appears wider, the shoulder line is lower and the shape itself is simpler than its predecessor. The new Civic comes as a sedan with a length of 4.67 meters, a width of 1.80 meters and a height of 1.41 meters.

For a better view of the driver, the A-pillars move back a little and the exterior mirrors down onto the door sills. A wider track at the back makes the Civic look stockier. Around 3.5 centimeters more wheelbase (now: 2.74 meters) stretch the proportions and create additional space in the interior. The entire lighting is based on LED technology. 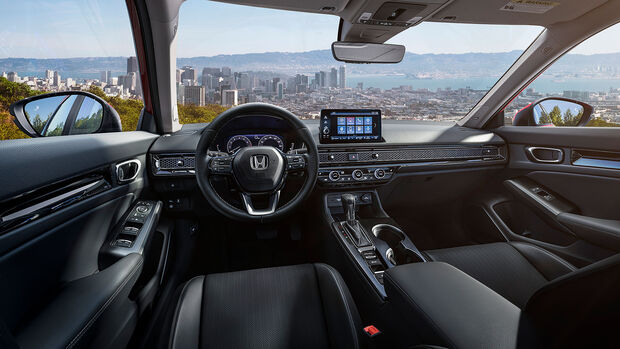 Honda
The calm itself: Honda has cleaned up the interior of the Civic thoroughly.

Inside there is now a 10.2-inch, fully digital, colored and configurable instrument display that sits in an extremely tidy dashboard. Honda is finally saying goodbye to the wildly rugged interior design of bygone years. The infotainment touchscreen in the center of the dashboard is seven inches diagonally. A nine-inch version is also available for an additional charge. A smartphone integration via Apple Carplay and Android Auto is always on board, at least in the USA. Likewise, an inductive charging cradle for mobile devices. Honda also attaches great importance to a significantly improved overview thanks to the narrow A-pillars and the low-set window line. New chairs should noticeably improve seating comfort.

Honda promises state-of-the-art technology for the assistance systems. For more safety, however, newly developed airbags, which offer more protection, especially in the head area, and an improved passenger cell structure should also ensure. Side airbags in the rear seats are also new. There are a total of ten airbags on board.

A stiffer chassis should sit under the body and the engines should enable more lively driving than before. In the USA, the Civic can be combined with a two-liter four-cylinder naturally aspirated gasoline engine and a 1.5-liter turbo gasoline engine, also with four cylinders. The vacuum cleaner comes to 158 hp and 188 Nm torque. The turbo is specified with 180 hp and 240 Nm torque. Both engines are coupled with front-wheel drive and a CVT transmission.

There is no question of hybridization, at least in the US model. A new edition of the extremely sporty R model has been set, and the Si model below is also new - so far, Honda has only offered this variant on the US market. Honda continues to target young customers with the large compact model, which is considered a small car in North America.

Proudly Made In USA

Honda will deliver the Civic sedan for the US market from summer 2022, the hatchback will follow a little later. The Civic sedan for North America is manufactured at the Alliston plant in Canada. The hatchback version is rolling off the assembly line for the first time in Honda's US plant in Greensburg, Indiana. Since Honda closes its European Civic plant in Swindon, England in 2021, the hatchback models are likely to be manufactured in Japan in the future. The prices and information for the European market are not yet available.

What is your first impression of the new Honda Civic?
At first glance, it looks quite inconspicuous.

Honda has designed the new Civic in line with contemporary tastes simply and chic. In addition, the clarity should have increased. The digital instrument display and the tidy dashboard appear pleasantly calm - a 180-degree turn away from the fissured worlds that Honda expected its drivers to do in the past.

In terms of safety, rigidity of the chassis, handling and engine performance, Honda promises decent increases. The Japanese seem to be turning more and more towards the US market - no wonder, after all, they are extremely successful there. So it could be that the Civic will also be a vehicle tuned to American taste, which the European customer will also get.