How do penguins keep their babies warm 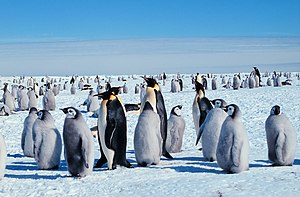 Emperor penguins in Antarctica. The little penguins with the light plumage are still young.

Penguins are birds that cannot fly. There are 18 different species of penguin. Everyone lives in freedom in the seas of the southern hemisphere. On land they only go to breed or to change feathers. Some even breed in Antarctica and nearby islands.

As birds, penguins have feathers. The belly is white, the rest black, gray or brownish. Their wings are reminiscent of the fins of fish. The fins help when swimming, as do the webbed feet. The legs are rather short. Mainly penguins live in the sea. Many penguins catch fish. Smaller species, on the other hand, eat small animals such as crabs.

Penguins have to endure both heat and cold. This is why they have a layer of fat under the skin that is 2-3 centimeters thick. It insulates the body from the extreme cold. There are three layers of feathers over the skin. Each layer alone would be waterproof. With three layers, the penguins are really on the safe side.

The penguins can be divided into two groups: The great penguins reproduce on the ice. So they hatch their egg on their feet to keep it warm. All other penguins build nests on the ground near the shore. Some do this in warmer areas as well. But that only works if there is a cold ocean current there.

How do great penguins grow up in Antarctica?

Emperor penguin chicks with their parents

The great penguins reproduce in Antarctica because they have the fewest enemies there. From mating until the young animal is independent, its parents stay together. The female lays only one egg at a time. It weighs about ten times as much as a hen's egg.

The parents take turns laying the egg on the feet and warming it in a fold of skin. The egg would freeze to death instantly on the ice. While the females are breeding, the males migrate to the sea to eat their fill. They often slide there on their stomach to move faster. Eating along with the path takes about 2-3 weeks. Then they detach their female so that she can go to eat.

The breeding season of the emperor penguins lasts about nine weeks. After hatching, the young spends a few more weeks between its parents' legs. The father takes care of the baby first and feeds it with a milky liquid from its beak.

Then the mother brings predigested fish in her stomach and feeds them to the young. Meanwhile the father goes to the sea. So the parents take turns continuously. If need be, great penguins even dive 45 meters to catch prey.

After a while, the youngster no longer needs the warmth of their parents. Larger young animals form groups so that their parents can leave them alone and go foraging for food at the same time. So they can get more food for the growing boy. They are usually around 20 years old.

How do the other penguins grow up? 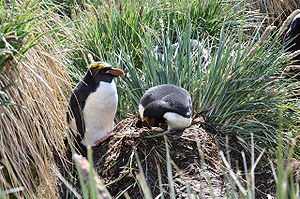 A goldhead penguin family in their nest

These penguins live in southern Africa, as well as Australia and New Zealand and other islands. These areas are far enough away from the equator that it is not too hot there. The Galapagos penguin is an exception. He lives on the Galapagos Islands, which are part of the country of Ecuador. There is a cold ocean current there.

The parents go to the mainland near the sea to mate. These are rocky coasts, cool forests, sandy beaches or grasslands. On firm ground, penguins waddle a little awkwardly and cannot find food, so they stay near the coast.

Most smaller penguins build a nest and lay two eggs in it. The young hatch with a few days apart. Most of the time, the penguins only feed their first child properly, so that the second soon starves and dies. If the first one dies very early, the parents raise the second one. At first one parent always stays with the little one, later they can stay alone in a group.