Why is monopoly competition called monopoly

The term monopoly competition denotes a form of imperfect market. Product differentiation gives consumers a wide choice between substitutable products that are manufactured and offered by specialized companies. Each provider is large enough to be able to influence its prices with regard to the reactions of the competitor (s).

You can divide markets according to different criteria. Depending on the perspective, markets must be differentiated according to market participants (monopoly, oligopoly, polypol), demand intensity (mass market, shrinking market) or also according to the goods traded (goods or product market, factor market). The model of monopoly competition combines different market forms and models, including monopoly and oligopoly, with the characteristics of competition.

The term monopoly competition is an expression coined by Edward Hastings Chamberlin for the market form of imperfect competition.

With a sufficiently strong product differentiation it is possible for the individual supplier to assume a monopoly position, albeit a weak one. Within certain limits, a provider can, for example, change its price like a monopoly. In a market with, albeit few, other providers, every strategic market measure always leads to a reaction from competitors.

Chamberlin assumes that a single provider tries to achieve the maximum profitable price, i.e. acts like a monopoly (Cournot's point). Since market entry is free and profits are made, new providers enter the market with comparable products and the price-sales function of the previous providers shifts towards the origin. If profit is ultimately no longer possible, the average cost curve affects the price-sales function (Chamberlin's tangent solution).

Example: Kellogg's cornflakes and a no-name product have the same purpose, but must be distinguished by the above-mentioned characteristics.

The higher the demand for a product and the higher the price of the competitors, the greater the sales. As a result, one can assume that sales will decrease as the number of competitors increases. Assuming that all companies in the branch are symmetrical, this results in an identical demand and cost function for all companies. 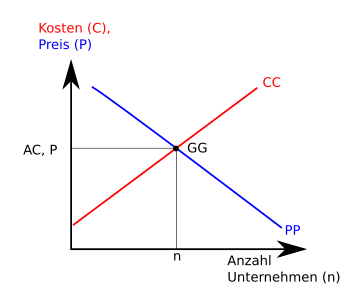 The model of monopoly competition only applies to a few industries. The assumption that every company behaves as a "real" monopoly is unsustainable for reality. Rather, the individual providers are aware of their influence on the behavior of their competitors. In the model of monopolistic competition, two typical behavioral patterns of the oligopoly are excluded. On the one hand, the coordinated behavior (collusion), which is unfavorable for the consumer, since the price here is kept above the calculated profit level. The coordination can take place through explicit contracts or tacit coordination strategies. The second possibility is strategic behavior, which creates barriers to the market by adding additional capacity. These targeted decisions reduce profits, but they influence the behavior of the competition and prevent potential rivals from entering the market. A model is always limited to the essential factors in order to represent reality in a simplified manner. Here, too, simplification is of great importance for understanding, especially with regard to foreign trade and in the context of the globalization of markets.

International trade enlarges the market, from the national market to the world market. Due to the "new" market size, the limitation of the previous production volume is no longer applicable. In addition to the quantity produced and sold, the variety of goods that can be offered to consumers is also expanding. In a bigger market there is more space for a higher number of ventures and the scope of the price changes. While there are no significant differences in resources or technology between companies, there are mutual benefits. These can arise within the scope of the opportunity costs, since one country may have lower production costs for a product than another. Further advantages of large markets are a larger number of companies on the supply side, which can also achieve higher sales. On the consumer side, lower prices and a greater variety of products are significant. 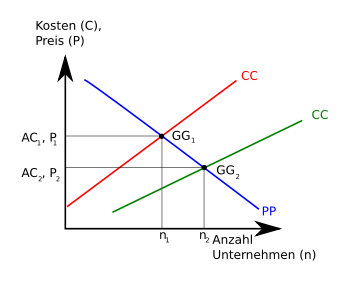 A comparison of two markets with different total sales shows that the CC curve of the larger market is below that of the smaller market. This means that more providers can act on the market so that the variety of products increases and the price decreases at the same time. With the price, the average costs (AC) of the providers also decrease.

Since the formula for the price does not take total sales into account, the PP curve does not shift due to a market expansion

By expanding the market, companies have the opportunity to increase production while lowering average costs. This is made clear by the downward shift of the CC curve, from point GG1 according to GG2. The result is an increasing number of companies with simultaneously falling prices. The situation in point GG1, with little choice of products and relatively high prices, is worse for consumers than the situation in point GG2, with lower prices and more choices.