How do frogs make eggs 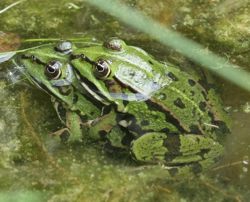 With real frogs and toads (picture water frog) the male clings to the female under the armpit when mating ... 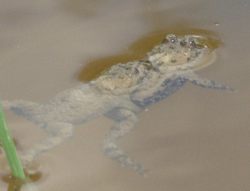 A frog's life begins with mating. For the early spawners, this begins in early spring. The agile frogs, which can spawn as early as the end of February, are among the first. The common and moor frogs join in later. The common toads are on their way around a week later, from mid-March to early April. These species often migrate to their spawning waters in large numbers at the same time (spawning migration). Other species such as the tree frogs, toads, water frogs and natterjack toads (late spawners) do not start their spawning business until late April or May. This can then continue into August in several phases (especially with the toads).

The mostly smaller male clings under the armpits of the female during mating in almost all species. Doom males, on the other hand, cling to the loins of the female. The male wears this on his back for up to several days, but often no longer than an hour. In early spawners such as the common frog and common toad, the males "travel" piggyback to the spawning area.

If a male has not yet found a female, it tries to lure one by croaking. This croak can be very loud, as in the case of the green frog, the tree frog or the natterjack toad. Their sound bubbles amplify the croaking so that it can be heard for several hundred meters or even kilometers.

Other frogs draw attention to themselves more quietly, some call almost imperceptibly under water. Quacking does not always mean to woo a female's favor. Sometimes it is used to defend your own territory against rivals. This can lead to extensive wrestling matches that last up to several minutes. They try to push each other under water. If a male tries to clasp another male, this also emits a call to draw attention to the error.

Once a couple has found each other and the male prevails over rivals, the female looks for a suitable place to spawn. When the female lays the eggs, the male immediately adds his sperm and spreads them on the eggs with his hind legs. The fertilization takes place outside the body. The female lays a few dozen eggs at a time, followed by a short pause. Individual species change their location (not far away), e.g. the green frogs. Brown frogs, on the other hand, lay them in one bale, sometimes in two.

While the water frog attaches its eggs to water plants, the balls of the common frog float on the surface of the water. If they have inflated themselves with water, they spread out like patties. If several pairs spawn in the same place, spawning carpets of up to several square meters can arise. The common toad stretches its spawning cords around aquatic plants or branches lying in the water, while the natterjack toad simply lays them on the bottom of the water.

When spawning is over, the male releases the clutch. With the exception of the green frogs, the female then leaves the water. The males stay a little longer. Some males can even produce more offspring a few days later. I observed that a male water frog mated a female four times in a month and a half! Individual females can spawn again later in the year, while others only spawn every two years (e.g. common toads). 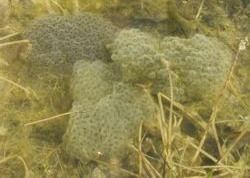 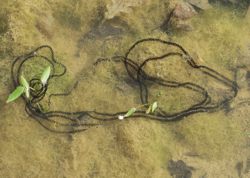 The midwife toad is a special case. In this case, mating takes place on land. While the female ejects the eggs, the male wraps them around his hind legs. It then carries these around with it for several weeks until they are ready to hatch. Only then does it release the tadpoles into the water, where they then go through the same development as with the other species. 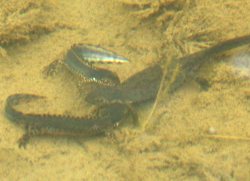 Since tail amphibians have no voice, other means are used to attract the female. The newt male wags scents with his tail in the direction of the female and some newt species also perform a kind of wedding dance to impress the female. In many species the newt male is conspicuously colored during the mating season (wedding dress). With the newts that inhabit still water, there is no physical contact during the mating game. Newts that inhabit flowing waters embrace the males around the females.

In the case of the European tail amphibians, fertilization takes place within the body. The female uses its cloaca to take in the spermatophores that the male has deposited. The mating of the alpine salamander takes place on land.

After fertilization, the female wraps the eggs individually in leaves of underwater plants.

The egg begins to develop shortly after the egg is laid.