Celebrities and their glasses - the favorite pieces of the stars

If you take a look at the red carpets of this world you can see more and more prominent personalities with glasses. Previously rather unusual for public appearances - today THE fashion accessory!

The best German example of a celebrity whose glasses have become a kind of trademark is probably Joko Winterscheidt. No show and no red carpet without its distinctive frame on the nose. This year he was even named glasses wearer of the year by the Kuratorium Gutessehen e.V. He himself stands by his nerd glasses and we think that he is the best proof that the right glasses only make a man more attractive.

Especially with men, glasses were often only a means to an end and not an accessory, but luckily that has changed, as we know. In addition to Joko, heartthrob Matthias Schweighöfer also likes to wear glasses and is not afraid to quickly take a "Carfie", in other words: a car selfie. He also likes to wear eye-catching glasses with large lenses, which may not be everyone's style, but don't worry, current glasses trends also allow narrow frames but still large lenses - ideal for approaching more eye-catching models. 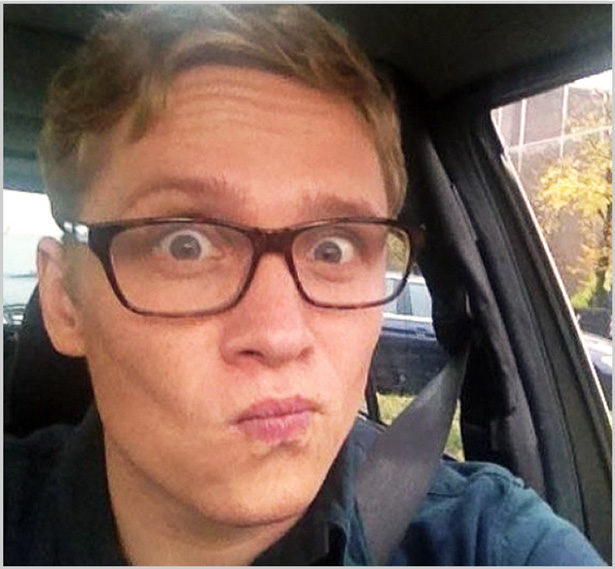 But not only the German celebrity men rely on glasses as accessories, but also international Hollywood actors like Brad Pitt and Johnny Depp. There is no trace of restraint in these two men, the face is perfectly staged with a strikingly large frame! Johnny, known for his cool looks, prefers to wear stylish panto glasses that were a trend in the 1940s and have finally found their way back. For his appearance on the red carpet, Brad opted for the wayfarer nerd look with large glasses and a thick black frame. 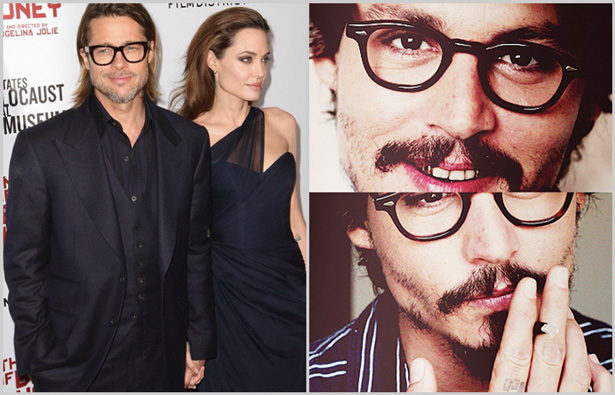 A touch of Hollywood - eyewear styling by celebrity ladies

Among the celebrity ladies, glasses are a popular accessory to spice up the look! Actress Demi Moore is someone who is seen with glasses very often in Hollywood. She is currently posing on Instagram with her daughter Rumor Willis under the hashtag #twinning. The family resemblance is also really unmistakable and the trendy glasses models round it off perfectly, as we think! Both wear a casual jumpsuit combined with eye-catching dark frames. They show a perfect street style look for mother and daughter and are a great way to complete the street style look. The round glasses, which are reminiscent of the hippies of the 70s and John Lennon, also go perfectly with the currently very popular bohemian style. 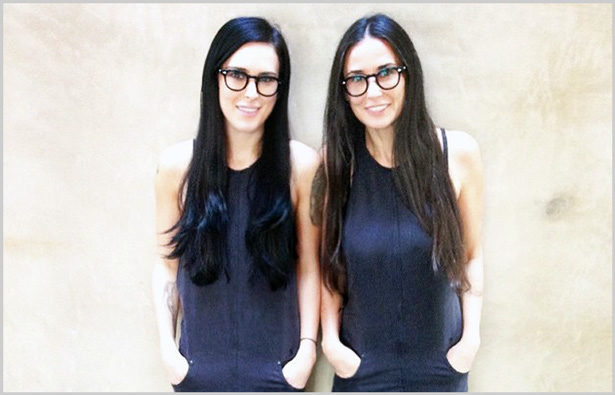 In addition to the Hollywood stars, top models such as Heidi Klum or Claudia Schiffer also present themselves in private with glasses. On the left in the picture, the native German supermodel Heidi in a selfie with very large vintage glasses, which are a bit reminiscent of grandpa's model from the 70s, but now make a great fashion statement. The narrow frame hardly covers anything of her face and still gives her a cool look. On the right is a snapshot of the self-confessed eyeglass wearer Claudia, who has already launched her own eyewear collection.

Glasses like those by Heidi Klum or Demi Moore are classics in black. But this year it can also be a little more colorful. At the same time, however, the designers also rely on natural materials such as horn or wood. Cat eye glasses are also back from the past. But no matter what shape and color: The courage to wear oversized glasses a la Heidi Klum is required! It quickly conjures up a trendy outfit from an ordinary everyday look.

In addition to the top models and actresses, the German super mum Natasha Ochsenknecht appears on Instagram on many of her colorful selfies, often with a wide variety of glasses in all possible colors and shapes. She usually combines her glasses with subtle eye make-up, but instead with her, you can call it a trademark, all the more striking, bright pink lipstick!

Stars and starlets from all over the world love eye-catching, large glasses. If you want to re-style the looks, you can also choose more subtle frames with a thinner frame to start with. Together with a pair of frayed denim shorts, a knitted shirt, cool boots and nickel glasses a la John Lennon, you can quickly recreate the casual street style look of the celebrities. The motto here is simple and casual.

Whether it's the international stars like Meryl Streep and Jennifer Aniston or national starlets like Eva Padberg and Wolfgang Joop, they all wear their glasses as fashion accessories and make them a must-have. And we can do that too!