Is Final Fantasy IV worth playing

Cecil and his Pixel friends are quickly growing in love.

Compared to the widely ramified ability trees of modern role-playing heroes, the development of Cecil's troop is relatively narrow. All properties improve as the level rises according to a predetermined plan. Different occupational classes as in Final Fantasy 5 or skills that can be learned from artifacts as in Final Fantasy 6 there is not any. The story is similarly linear. Apart from secret passages with treasure chests and a handful of optional locations such as the haunted cave of the sylphs, all three components of the Complete Collection follow a storyline with no branches.

As straightforward as the game is, its scope is impressive. Even the original epic takes 40 to 60 hours. The additional nine chapters of the sequel published in 2009 drive with four to six hours each Final Fantasy 4 - The After Years the playing time continues to rise. During the new episode Interlude, the chocobo cuckoo crows an additional four times. 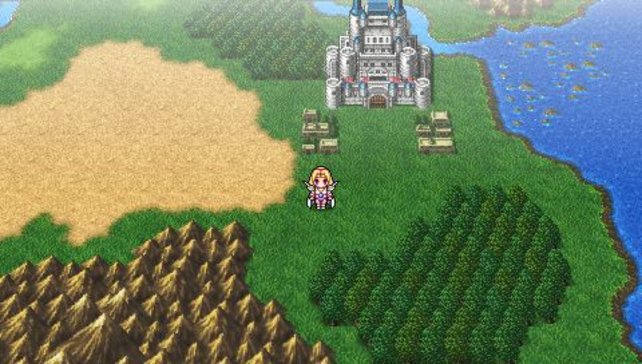 In all three parts you travel over an abstract upper world.

One moon too many

While the scope and the carefully renovated presentation of the complete edition are convincing overall, the quality of the content of its three parts fluctuates. Cecil's original expedition to the evil second moon in Final Fantasy 4 is predictable from today's perspective, but also entertaining and encourages you to continue playing with lovable characters. In addition, with the romance between Cecil and Rosa, the developers tell the first love story in the series that deserves such a name.

The second trip to the moon by her son Ceodore in The After Years, on the other hand, is mixed. This is due, on the one hand, to the incoherent, confused narrative style of the episodes originally offered individually in the Wii shopping channel, and, on the other hand, to the locations and plot elements that have been recycled too unimaginatively. What makes The After Years interesting for fans of Final Fantasy 4, in addition to the reunion with the original heroes, is the originally varied combat system. As with the "Tech" command Chrono trigger two characters may combine their attacks into "band" maneuvers. Moon phases also influence the fighting strength of your heroes and the strength of monsters. The interlude episode of Ceodore's birth, published for the first time, reports too briefly and narrative irrelevant.