What are concave lenses

What are Concave and Convex Lenses? 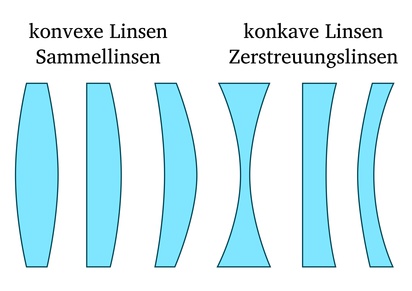 In optics, scientists are concerned with the properties and the propagation of light. Light propagates in a straight line in a medium (the medium is a substance that lets light through). Such a medium can be, for example, air or glass or water. One of the interesting properties of light is the fact that light can be deflected from its straight path. When light passes from one medium to another, it can be diverted from its straight path. This process is called refraction of light (or just refraction).

Convex lenses
Outwardly curved lenses are also called converging lenses. Parallel light rays are brought together behind the lens in a "focal point", "collected". Hence the term converging lens. If both sides of the lens are curved outwards, then this lens is also called "biconvex". If one side is not curved, ie "flat", then it is called "plano-convex".

The focal length is the distance between the focal point and the center of the lens and has a positive value. The reciprocal value of the focal length is the "refractive power" (unit: dioptre), so it also has a positive value for convex lenses ("plus lenses"). The higher a positive diopter number, the more the lens enlarges. Convex lenses are used, for example, to correct farsightedness and as magnifying glasses. They are also used in microscopes or photo lenses.

Concave lenses
Inwardly curved lenses are also called diverging lenses. Parallel rays of light are "scattered" behind the lens, that is, led away from each other. If both sides of the lens are curved inwards, this lens is also called "biconcave". If a side is not curved, ie "flat", then it is called "flat-concave".

The individual rays all seem to come from a focus in front of the lens. Therefore, the distance from the lens center to this apparent focus is given as a negative focal length. The refractive power (in diopters) of concave lenses therefore also has a negative value ("minus lenses"). Concave lenses are used to correct myopia as well as in various optical instruments.

shopping in the shop