Does our consciousness create reality?

You are a born narcissist. You are aware of your own existence - you do not care whether this applies to others as well, because what counts for you is what you yourself experience and experience. The world is the stage for the drama of your life. You are the center of reality. As you grow up, you realize that other people matter too. Your narcissism begins to encompass your family, your tribe, eventually all of humanity. Reality may not exist for you personally, but it certainly does exist for your species.

So natural are these assumptions that we have hardly questioned them in the course of our history and history. Religions reflect this self-centeredness, and initially so did the sciences. Sun, moon, planets, stars, the entire cosmos revolved around the earth, our home. Don't our eyes show us this every day and every night? It took courage and imagination, careful observation and rational analysis - this was the only way Copernicus, Kepler and Galileo could challenge the geocentric worldview. Their insights, which were initially met with disbelief and hostility, helped us escape our original self-centeredness. 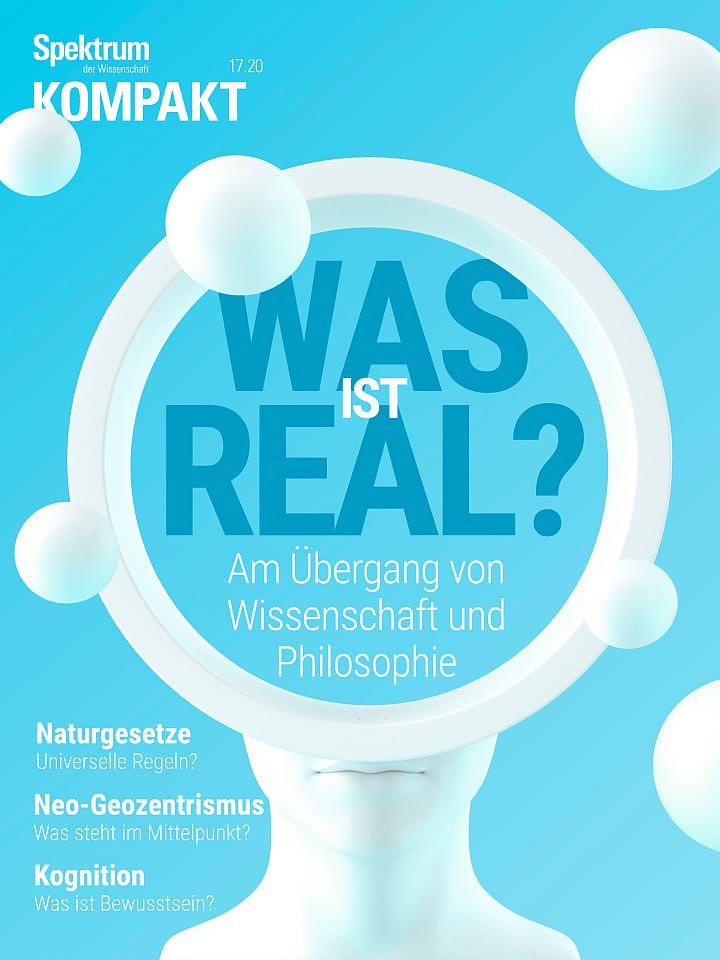 This article is contained in Spectrum Compact, What is real? - At the transition from science and philosophy

Today we know that the earth is only one of nine planets orbiting the sun - I refuse to belittle Pluto - that our sun is only one of billions of stars in the galaxy, which in turn is only one of innumerable galaxies in the universe whose existence began explosively in the Big Bang 14 billion years ago. Our planet was formed 4.5 billion years ago, and the first unicellular organisms appeared a billion years later. A few hundred thousand years ago, only a fraction of a second in cosmic time, we appeared - and assumed that the whole cosmos was made just for us. We should Homo narcissus call. When we finally realized how insignificant we are compared to the immeasurable size of space and time, it was a humiliation to us. But this knowledge should also be a source of pride. We had the intelligence and the maturity to escape our delusional overestimation of ourselves and the superstitions of the dark ages. We had the name homo sapiens earned.

Awareness as a catalyst for the big bang?

Recently, however, respected scientists and philosophers have been propagating ideas that bring us - more precisely: our intellect, our consciousness - back into focus. I call this view "neo-geocentrism". As far as we know today, consciousness is a property of a particularly bizarre form of matter that only emerged on Earth in cosmically recent times: brains. Neo-geocentrics still claim that the entire cosmos is permeated with consciousness - and consciousness may even be the spark that triggered the Big Bang.

Neo-geocentric thinking has always lurked on the fringes of science, but it has now become a common trend. This was shown, for example, in September 2016 at the "Wise & Scientists" meeting initiated by Deepak Chopra, a well-known guru of the holistic health scene. There the call rang out for a "new science" that "can accept consciousness as fundamental and not just as a by-product of the brain." Chopra is expected to take this point of view, as he once belonged to the Transcendental Meditation movement and still shows sympathy for Hindu metaphysics. But neo-geocentric notions included the neuroscientist Rudolph Tanzi of Harvard University, co-author of two books by Chopra, the psychologist Donald Hoffman of the University of California at Irvine, and the psychiatrist Daniel Siegel of the University of California in Los Angeles.

Neo-geocentric thinking also grew at awareness gatherings in Tucson, Arizona, in the spring of 2016 and in the fall of 2015 at New York University, which I attended. There, full professors from large institutions expressed the view that consciousness is at least as important as matter. Here are some selected examples of neo-geocentrism: