In the seconds until a patient is intubated and ventilated, mask ventilation can effectively prevent the oxygen saturation from dropping too much. This does not - as had been feared for decades - increase the risk of pneumonia from inhaling liquid (aspiration pneumonia) due to the overpressure during ventilation. This is emphasized by the pulmonologists of the Association of Pneumological Clinics (VPK), referring to current study results. 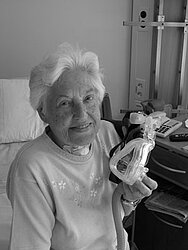 Artificial ventilation is required when the patient is no longer breathing independently. This can be the case during a major operation, after a serious accident or as a result of a serious illness. The first brain cells die after just three minutes without oxygen, permanent damage threatens after four minutes, and often death after five minutes. However, invasive ventilation via a tube is only possible after sedation and in some cases after a neuromuscular blockage - that is, it is necessary to let the person concerned sleep (deep sedation) and to relax his muscles. In addition, the patient is given a so-called lightning induction, during which a narcotic and a fast-acting muscle relaxant are injected. However, this also interrupts the patient's breathing for about 45 to 90 seconds until the tube is inserted through the mouth, nose or an incision in the trachea and the patient can thus be ventilated. In order to prevent the oxygen saturation from dropping too much during this time, mask ventilation (using a mouth and nose mask) should be carried out in the meantime. The pulmonologists of the Association of Pneumological Clinics (VPK) recommend this, referring to current study results from the USA (see New England Journal of Medicine, published online February 28, 2019), which prove that temporary mask ventilation is effective and does not increase the risk of pneumonia from inhaling liquid (aspiration pneumonia).

Risk of aspiration pneumonia is not increased by positive pressure ventilation

“So far, many anesthetists in particular have feared that mask ventilation, which is carried out with a slight excess pressure, could also have the undesirable side effect for the patient of gastric juice getting into his airways and causing aspiration pneumonia there. This fear, which has existed almost since the introduction of lightning initiation in the 1970s, has now finally been resolved after a good five decades in a larger study, "explains Dr. med. Thomas Voshaar, Chairman of the Board of the Association of Pneumological Clinics (VPK) and Chief Physician of the Lung Center at Bethanien Hospital in Moers. The current US study with around 400 participants from 7 different treatment centers (see New England Journal of Medicine, published online February 28, 2019) has shown that patients who received mask ventilation before intubation were better cared for than those without mask ventilation: They had a better oxygen supply, and oxygen saturation with mask ventilation fell less than 80 percent (hypoxemia) and this was the result no accumulation of aspiration pneumonia was observed. "This shows the advantages of mask ventilation, which we as pulmonologists can only recommend routinely to improve the oxygen supply," emphasizes Dr. Voshaar.

This is a press release from the Association of Pneumological Clinics (VPK). This press release or parts of the article can be printed under the following source: www.lungenaerzte-im-netz.de. In the case of publication in online media, this source is required (in the form of an active link either to the home page or to a subpage of the pulmonary doctors-on-the-net website); if published in print media, a reference to this web address is also required.