Tuvalu, formerly the Ellice Islands, is an island nation in Oceania. The location is about 1000 km west of Fiji, halfway between Hawaii and Australia and on almost the same longitude as New Zealand. The name means eight islands. The inhabitants are Polynesians.

Tuvalu is divided into nine inhabited islands that are connected by ferries. The seat of government is on the Funafuti atoll. 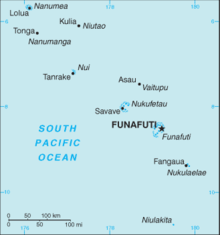 The country's atolls are acutely threatened by rising sea levels due to climate change. Every year around 1,600 tourists come.

A passport that is valid for at least 6 months after the planned stay is required to enter the country. Since July 2016, citizens of the Schengen countries have been free of visas for up to 90 days. The German child ID card is not recognized. Children must therefore travel with their own children's passport. Departure Tax: AUD $ 30.00

The journey from Europe is quite complicated. The best option is a flight from Europe to Fiji. Fiji Airways operates the Nadi International Airport (NAN) - Funafuti (FUN) route twice a week (2016: Tuesday and Friday).

The runway of the

With the ship [edit]

There are regular ferries from the Fiji Islands.

The individual islands are connected by freighters that also serve as ferries. There are no flights to the outer islands. Depending on the island, the timetable is very different, there can be weeks between visits.

Mainly Tuvalu is spoken. Tourists also get along well with English on the main island.

The local currency is the Tuvalu dollar, which is linked 1: 1 to the Australian dollar and whose banknotes are in circulation in the country. There are only (collector) coins of the Tuvalu dollar. The National Bank of Tuvalu (NBT), directly opposite the airport terminal, (Mon-Thu, 10 am-2pm, Fri. to 1pm).

There is no way to withdraw money from ATMs in Tuvalu. Credit cards are also not accepted. It is therefore important to bring enough cash with you for a stay.

There are no souvenir shops. The Women's Handicraft Center opens his booth at the airport on days with flights.

The serving of alcohol follows the Australian model of the "license," not all restaurants have one.

An overview of the accommodations on the main island of Funafuti, with booking options, can be found on the website of the tourist office.

The lagoon near the capital is littered. There is a clean sandy beach in the south of the atoll on the islet of Funafala.

There is no military, but there is a small police force. Crimes rarely occur; in the years since 2010, never more than eleven people have been imprisoned at the same time. On the smaller islands, the “chiefs” are also comparatively effective law enforcement officers within the framework of the clan system.

The police station is right next to the airport.

The only real hospital is on the main island of Funafuti; with dental clinic.

There are no fresh water springs, streams or lakes. Drinking water is obtained from collected rainwater.

Tuvalu has a tropical climate with average temperatures around 30 degrees Celsius. The rainy season, during which heavy rains can occur, is between November and February. At this time of year, typhoons sometimes move over the islands.

Homosexual acts are armed with up to 14 years imprisonment under the criminal law, but persecution has not taken place for years.

Communication services are provided by the state Tuvalu Telecommunications Corporation ready. Cellular is only available on Funafuti, Vaitupu and Nukulaelae. The only cell tower of the 3G network in Vaiaku, which was switched on in 2014, is designed for 60 simultaneous calls. Internet services also run via satellite and are comparatively slow with a maximum of 1.5 Mbit. In 2016, a 5-year expansion phase began, after which speeds of 80-125 Mbit / s will be possible, but the bandwidth must be shared by all participants. Radio Tuvalu only broadcasts on medium wave.

SIM cards (AU $ 10 with $ 5 credit) are sold by TTC, which is located right next to the police station and the post office at the airport.