Does the AI ​​beat people when it comes to stock picking?

Artificial intelligence These funds operate with an algorithm

Artificial intelligence is a big topic, a future model and a megatrend. It increasingly determines our everyday life and has become an indispensable part of many areas. The business model of many companies is now based on artificial intelligence, while other companies are developing technologies based on AI. Right at the forefront and driver of the process: the USA. Just a few days ago, the congress there launched a project with the National Artificial Intelligence Initiative Act (NAIIA) to further promote state-wide AI activities. Artificial intelligence (AI) has also been the basis of some investment companies for stock selection for several years. In the following, we present three investment funds to our readers, all of which operate with an algorithm but set different accents.

This equity fund was “freshly launched” in August of last year. The two initiators Prof. Dr. Wolfgang Kuhle and Dr. Markus Knopf had previously developed a computer-aided trading strategy over several years to identify patterns in financial market data. Kuhle, an economist, and Knopf, a mathematician, rely on interdisciplinary competence: "This results in exciting interactions between the actors," says Markus Knopf to FondsDISCOUNT.de. The combination of mathematical-formal security selection and economic competence is not so often found in the fund landscape.

The initiator duo Wolfgang Kuhle and Markus Knopf are focusing on the USA because, from their point of view, the most liquid markets can be found there. “There is also the most modern data infrastructure and the largest number of large caps. It is easier for the algorithm to filter out profitable companies than anywhere else, ”said Knopf. The focus is on established traditional companies including the large and successful technology groups. The investment universe includes around 1,500 stocks. The service sector, the food industry and the healthcare sector currently have the highest weighting. Top positions in the portfolio include Public Storage, a real estate investment trust (REIT), Georgia-based financial services company Equifax, and Oakland-based household goods and chemical company Clorox Company. It is planned to develop a similar model of the SUPREMUM Fund for Asia and Europe.

The management of the equity fund has committed itself to artificial intelligence in two ways. Portfolio manager Brice Prunas not only uses AI algorithms to identify relevant stocks, but also invests in artificial intelligence. The fund manager first filters out stocks using an AI-based model with an AI reference. To this end, four million data records are analyzed per day: "In our investment process, artificial intelligence helps to compensate for cognitive blind spots and lack of attention and thus to open up an investment universe that includes more individual stocks than would be possible with limited human abilities," said Prunas to FondsDISCOUNT. de. You cannot know all the companies in the world and some of them are not comprehensive enough.

Tech giants, AI pioneers and companies that benefit from AI are part of the investment universe. Prunas attaches great importance to the global approach. The central pillars of the AI ​​value chain (data, hardware / semiconductors, services, software and talent) in the USA, China, Japan and on the European markets are under constant observation. The heavyweights of the portfolio consisting of around 60 titles are the US companies Formfactor, a specialist in test and measurement solutions, Teradyne, a manufacturer of test systems for microprocessors, and the semiconductor specialist Lam Research.

Acatis works closely with hedge fund manager Jamie Wise on this ki fund. The Canadian capital market expert uses artificial intelligence to record market sentiments (sentiment analysis). To do this, Wise has the data from all social media comments in more than 30 publicly accessible online media evaluated in order to get a picture of the sentiment of certain stocks. The results are summarized and condensed into the assessments “bullish”, “bearish” or “neutral”. The 75 stocks with the best sentiment are included in the Buzz Next-Gen AI US Sentiment Leaders Index and thus also in the Acatis fund. The investment universe only includes companies listed on the major US stock exchanges with a market capitalization of at least five billion US dollars. In addition, there must be a minimum number of mentions in the social networks over the past twelve months for each share.

"We see the advantage in the amount of data that we can analyze with the help of artificial intelligence (AI) in the shortest possible time," said Stefan Riße, capital market strategist at Acatis, about FondsDISCOUNT.de. Artificial intelligence can recognize relationships between series of numbers that you would not see at all. The management team reviews the portfolio once a month and replenishes it if necessary. Currently, the semiconductor specialist AMD, e-car manufacturer Tesla and Zoom are equally weighted (around 2.7 percent) among the heavyweights in the portfolio.

Performance over the one-year period 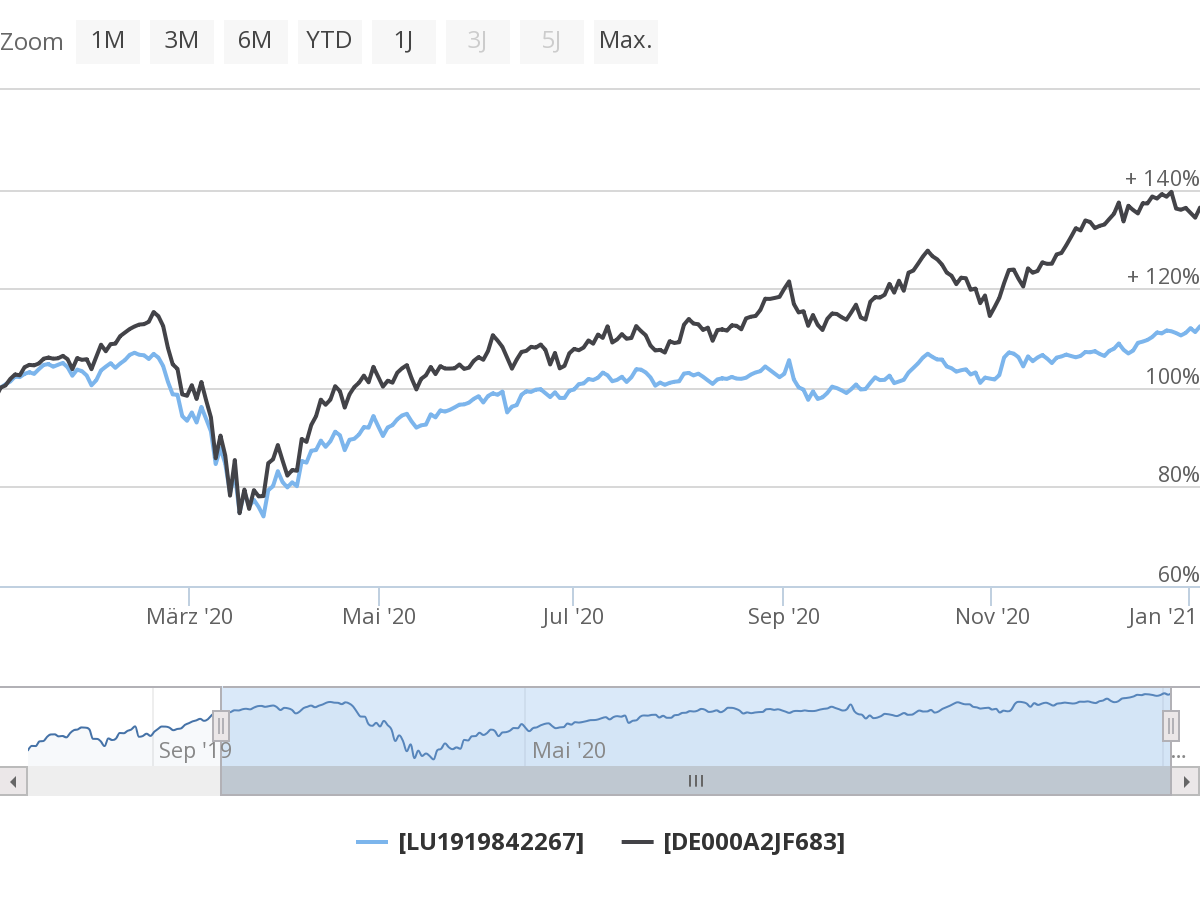 tip: Would you like to invest in AI funds? With FondsDISCOUNT.de you save the front-end load that is customary in the industry.